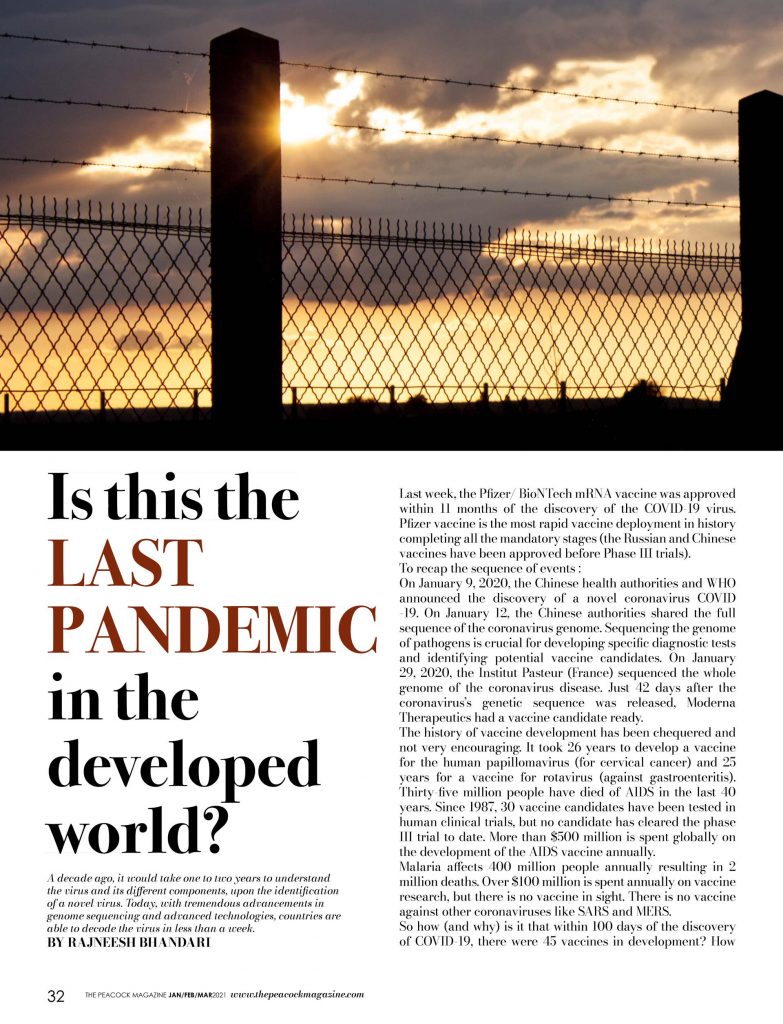 A decade ago, it would take one to two years to understand the virus and its different components, upon the identification of a novel virus. Today, with tremendous advancements in genome sequencing and advanced technologies, countries like China and France were able to decode the virus in less than a week.
– BY RAJNEESH BHANDARI

Last week the Pfizer/ BioNTech mRNA vaccine was approved within 11 months of the discovery of the COVID 19 virus. Pfizer vaccine is the most rapid vaccine deployment in history completing all the mandatory stages (the Russian and Chinese vaccines have been approved before Phase III trials).

To recap the sequence of events :
On January 9, 2020, the Chinese health authorities and WHO announced the discovery of a novel coronavirus COVID 19. On January 12, the Chinese authorities shared the full sequence of the coronavirus genome. Sequencing the genome of pathogens is crucial for developing specific diagnostic tests and identifying potential vaccine candidates. On January 29, 2020, the Institut Pasteur ( France ) sequenced the whole genome of the COVID 19 coronavirus. Just 42 days after the coronavirus’s genetic sequence was released, Moderna Therapeutics had a vaccine candidate ready.

The history of vaccine development has been chequered and not very encouraging. It took 26 years to develop a vaccine for the human papillomavirus (for cervical cancer ) and 25 years for a vaccine for rotavirus( against gastroenteritis).Thirty-five million people have died of AIDS in the last 40 years. Since 1987, 30 vaccine candidates have been tested in human clinical trials, but no candidate has cleared the phase III trial to date. More than $500 million is spent globally on the development of the AIDS vaccine annually.

So how (and why) is it that within 100 days of the discovery of COVID 19, there were 45 vaccines in development? How was it possible for the first vaccine – from RNA sequencing to injecting a volunteer – be done in just 63 Days (Moderna)? 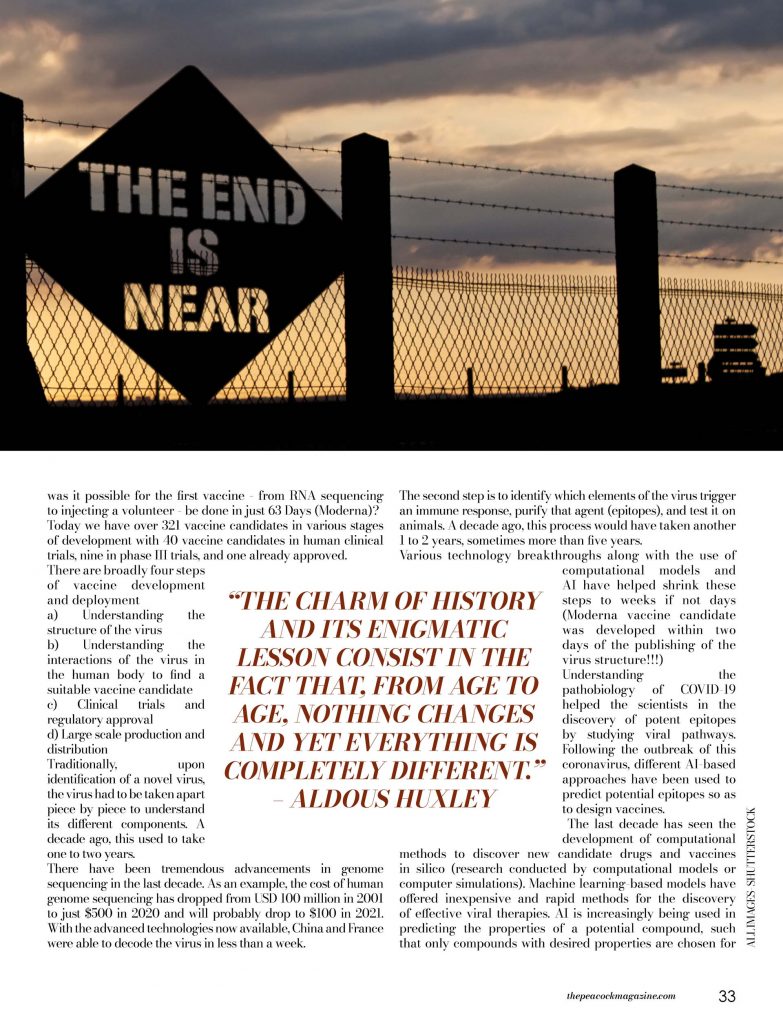 Traditionally, upon identification of a novel virus, the virus had to be taken apart piece by piece to understand its different components. A decade ago, this used to take 1 to 2 years.
There have been tremendous advancements in genome sequencing in the last decade. As an example, the cost of human genome sequencing has dropped from USD 100 million in 2001 to just $500 in 2020 and will probably drop to $100 in 2021. With the advanced technologies now available, China and France were able to decode the virus in less than a week.

The second step is to identify which elements of the virus trigger an immune response, purify that agent (epitopes), and test it on animals. A decade ago, this process would have taken another 1 to 2 years, sometimes more than five years.

Various technology breakthroughs along with the use of computational models and AI have helped shrink these steps to weeks if not days (Moderna vaccine candidate was developed within 2 days of the publishing of the virus structure!!!)

Understanding the pathobiology of COVID-19 helped the scientists in the discovery of potent epitopes by studying viral pathways. Following the outbreak of this coronavirus, different AI-based approaches have been used to predict potential epitopes so as to design vaccines.

The last decade has seen the development of computational methods to discover new candidate drugs and vaccines in silico (research conducted by computational models or computer simulations). Machine learning-based models have offered inexpensive and rapid methods for the discovery of effective viral therapies. AI is increasingly being used in predicting the properties of a potential compound, such that only compounds with desired properties are chosen for further development, saving time and money. AI has also been useful in generating ideas for entirely novel compounds with all the desired properties, which could hugely accelerate the discovery of a new class of drugs.

The third and most crucial step is clinical trials. Like all medicines, vaccines go to clinical trials after they are tested in experimental animals. Based on typical FDA processes, the time for clinical trials could be more than ten years, as the regulatory body requires vaccines to undergo at least three phases of clinical trials before applying for approval.
Phase I is to assess the safety of the vaccine candidate. A few healthy volunteers (between 20 to 80) receive the vaccine, and vaccine developers look for any serious consequences of the vaccine and try out different dose regimes. 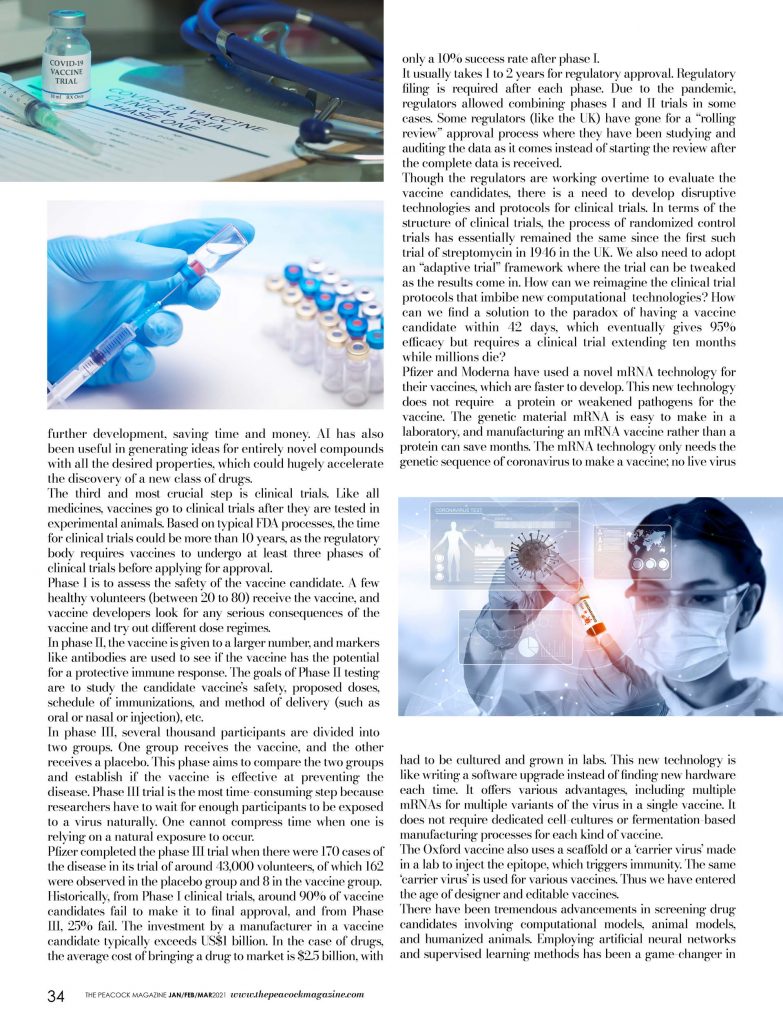 In phase II, the vaccine is given to a larger number, and markers like antibodies are used to see if the vaccine has the potential for a protective immune response. The goals of Phase II testing are to study the candidate vaccine’s safety, proposed doses, schedule of immunizations, and method of delivery (such as oral or nasal or injection), etc.

In phase III, several thousand participants are divided into two groups. One group receives the vaccine, and the other receives a placebo. This phase aims to compare the two groups and establish if the vaccine is effective at preventing the disease. Phase III trial is the most time-consuming step because researchers have to wait for enough participants to be exposed to a virus naturally. One cannot compress time when one is relying on a natural exposure to occur.
Pfizer completed the phase III trial when there were 170 cases of the disease in its trial of around 43,000 volunteers, of which 162 were observed in the placebo group and 8 in the vaccine group.

Historically, from Phase I clinical trials, around 90% of vaccine candidates fail to make it to final approval, and from Phase III, 25% fail. The investment by a manufacturer in a vaccine candidate typically exceeds US$1 billion. In the case of drugs, the average cost of bringing a drug to market is $2.5 billion, with only a 10% success rate after phase I.
It usually takes 1 to 2 years for regulatory approval. Regulatory filing is required after each phase. Due to the pandemic, regulators allowed combining phases I and II trials in some cases. Some regulators (like the UK) have gone for a “rolling review” approval process where they have been studying and auditing the data as it comes instead of starting the review after the complete data is received.
Though the regulators are working overtime to evaluate the vaccine candidates, there is a need to develop disruptive technologies and protocols for clinical trials. In terms of the structure of clinical trials, the process of randomized control trials has essentially remained the same since the first such trial of streptomycin in 1946 in the UK. We also need to adopt an “adaptive trial” framework where the trial can be tweaked as the results come in. How can we reimagine the clinical trial protocols that imbibe new computational technologies? How can we find a solution to the paradox of having a vaccine candidate within 42 days, which eventually gives 95% efficacy but requires a clinical trial extending ten months while millions die?

Pfizer and Moderna have used a novel mRNA technology for their vaccines, which are faster to develop. This new technology does not require a protein or weakened pathogens for the vaccine. The genetic material mRNA is easy to make in a laboratory, and manufacturing an mRNA vaccine rather than a protein can save months. The mRNA technology only needs the genetic sequence of coronavirus to make a vaccine; no live virus had to be cultured and grown in labs. This new technology is like writing a software upgrade instead of finding new hardware each time. It offers various advantages, including multiple mRNAs for multiple variants of the virus in a single vaccine. It does not require dedicated cell-cultures or fermentation-based manufacturing processes for each kind of vaccine.
The Oxford vaccine also uses a scaffold or a ‘carrier virus’ made in a lab to inject the epitope, which triggers immunity. The same ‘carrier virus’ is used for various vaccines. Thus we have entered the age of designer and editable vaccines. 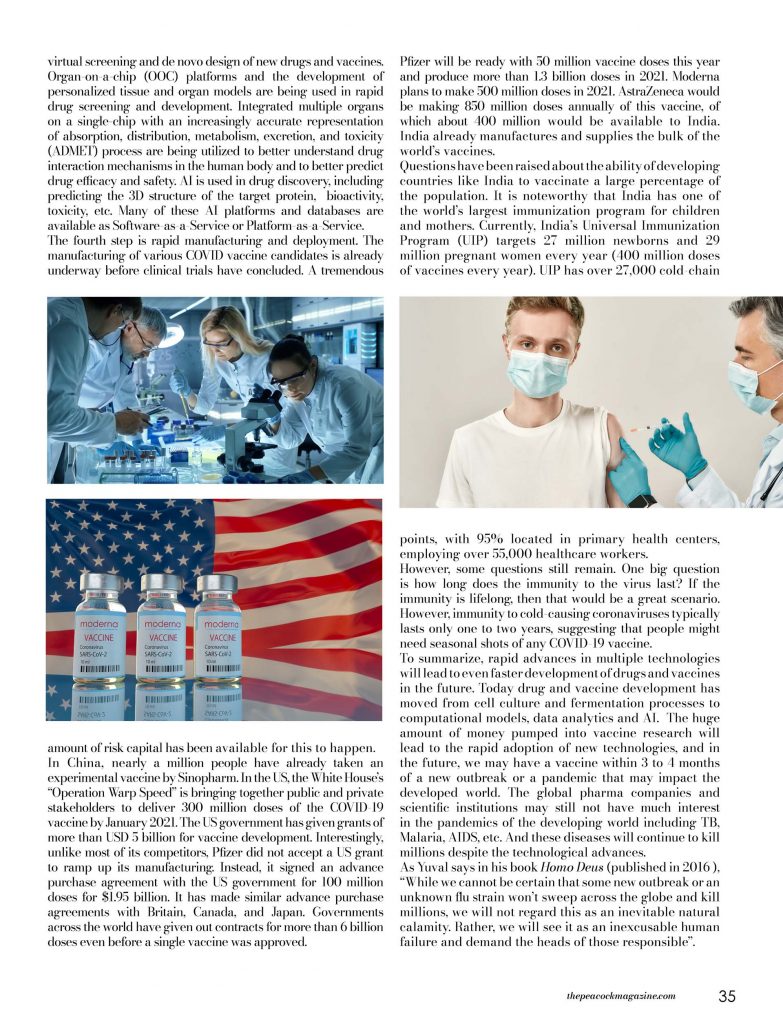 There have been tremendous advancements in screening drug candidates involving computational models, animal models, and humanized animals. Employing artificial neural networks and supervised learning methods have been a game-changer in virtual screening and de novo design of new drugs and vaccines.
Organ-on-a-chip (OOC) platforms and the development of personalized tissue and organ models are being used in rapid drug screening and development. Integrated multiple organs on a single-chip with an increasingly accurate representation of absorption, distribution, metabolism, excretion, and toxicity (ADMET) process are being utilized to better understand drug interaction mechanisms in the human body and to better predict drug efficacy and safety. AI is used in drug discovery, including predicting the 3D structure of the target protein, bioactivity, toxicity, etc. Many of these AI platforms and databases are available as Software-as-a-Service or Platform-as-a-Service.

The fourth step is rapid manufacturing and deployment. The manufacturing of various COVID vaccine candidates is already underway before clinical trials have concluded. A tremendous amount of risk capital has been available for this to happen.

In China, nearly a million people have already taken an experimental vaccine by Sinopharm. In the US, the White House’s “Operation Warp Speed” is bringing together public and private stakeholders to deliver 300 million doses of the COVID-19 vaccine by January 2021. The US government has given grants of more than USD 5 billion for vaccine development. Interestingly, unlike most of its competitors, Pfizer did not accept a US grant to ramp up its manufacturing. Instead, it signed an advance purchase agreement with the US government for 100 million doses for $1.95 billion. It has made similar advance purchase agreements with Britain, Canada, and Japan. Governments across the world have given out contracts for more than 6 billion doses even before a single vaccine was approved.

Questions have been raised about the ability of developing countries like India to vaccinate a large percentage of the population. It is noteworthy that India has one of the world’s largest immunization program for children and mothers. Currently, India’s Universal Immunization Program (UIP) targets 27 million newborns and 29 million pregnant women every year (400 million doses of vaccines every year). UIP has over 27,000 cold-chain points, with 95% located in primary health centers, employing over 55,000 healthcare workers.

However, some questions still remain. One big question is how long does the immunity to the virus last? If the immunity is lifelong, then that would be a great scenario. However, immunity to cold-causing coronaviruses typically lasts only one to two years, suggesting that people might need seasonal shots of any COVID-19 vaccine.

To summarize, rapid advances in multiple technologies will lead to even faster development of drugs and vaccines in the future. Today drug and vaccine development has moved from cell culture and fermentation processes to computational models, data analytics and AI. The huge amount of money pumped into vaccine research will lead to the rapid adoption of new technologies, and in the future, we may have a vaccine within 3 to 4 months of a new outbreak or a pandemic that may impact the developed world. The global pharma companies and scientific institutions may still not have much interest in the pandemics of the developing world including TB, Malaria, AIDS etc and these diseases will continue to kill millions despite the technological advances.

As Yuval says in his book Homo Deus (published in 2016 ), “While we cannot be certain that some new outbreak or an unknown flu strain won’t sweep across the globe and kill millions, we will not regard this as an inevitable natural calamity. Rather, we will see it as an inexcusable human failure and demand the heads of those responsible”.

THE NEW WAVE OF DIGI SAPIENS