“Eva Chen, the director of fashion at Instagram, has been a force to be reckoned with. Instagram is no more just a regular app; it has advanced into an advertising tool for fashion businesses and glossy publications. Chen plays the mediator between the two and enables fashion insiders to utilize the strength of an app that has more than a billion users. Eva’s earliest stint in fashion traces back to her internship at Harper’s Bazaar, after which she worked at a number of high-end magazines and also heading a few. Her eye for detail and her excellence with social media has helped new labels and established brands find their voice on the digital platform. Eva’s recently launched book, Juno Valentine and the Magical shoes became a New York Times bestseller and were recommended by the like of Oprah Winfrey and Rachel Ray.” 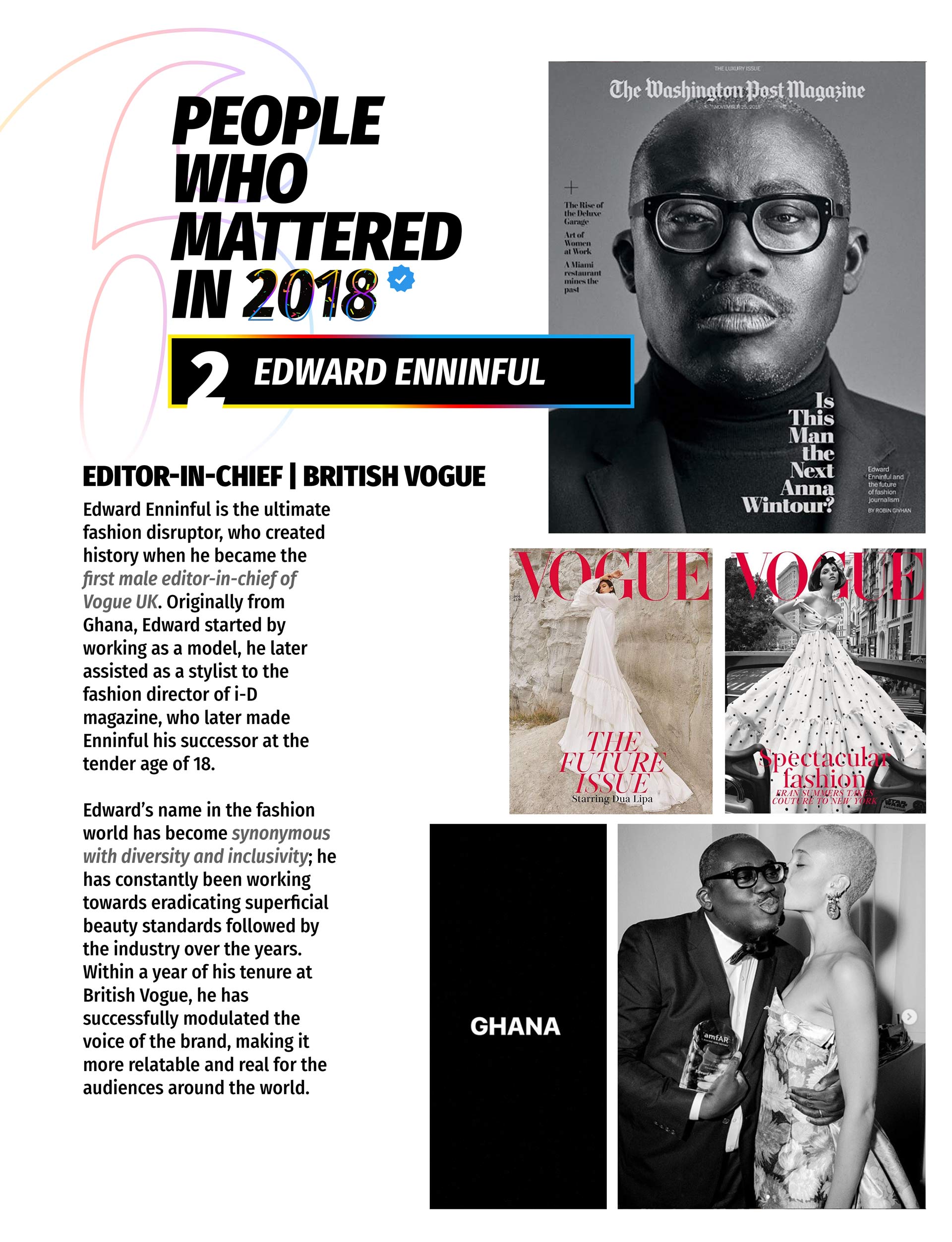 “Edward Enninful is the ultimate fashion disruptor, who created history when he became the first male editor-in-chief of Vogue UK. Originally from Ghana, Edward started by working as a model, he later assisted as a stylist to the fashion director of the i-D magazine, who later made Enninful his successor at the tender age of 18. Edward’s name in the fashion world has become synonymous with diversity and inclusivity; he has constantly been working towards eradicating superficial beauty standards followed by the industry over the years. Within a year of his tenure at British Vogue, he has successfully modulated the voice of the brand, making it more relatable and real for the audiences around the world.” 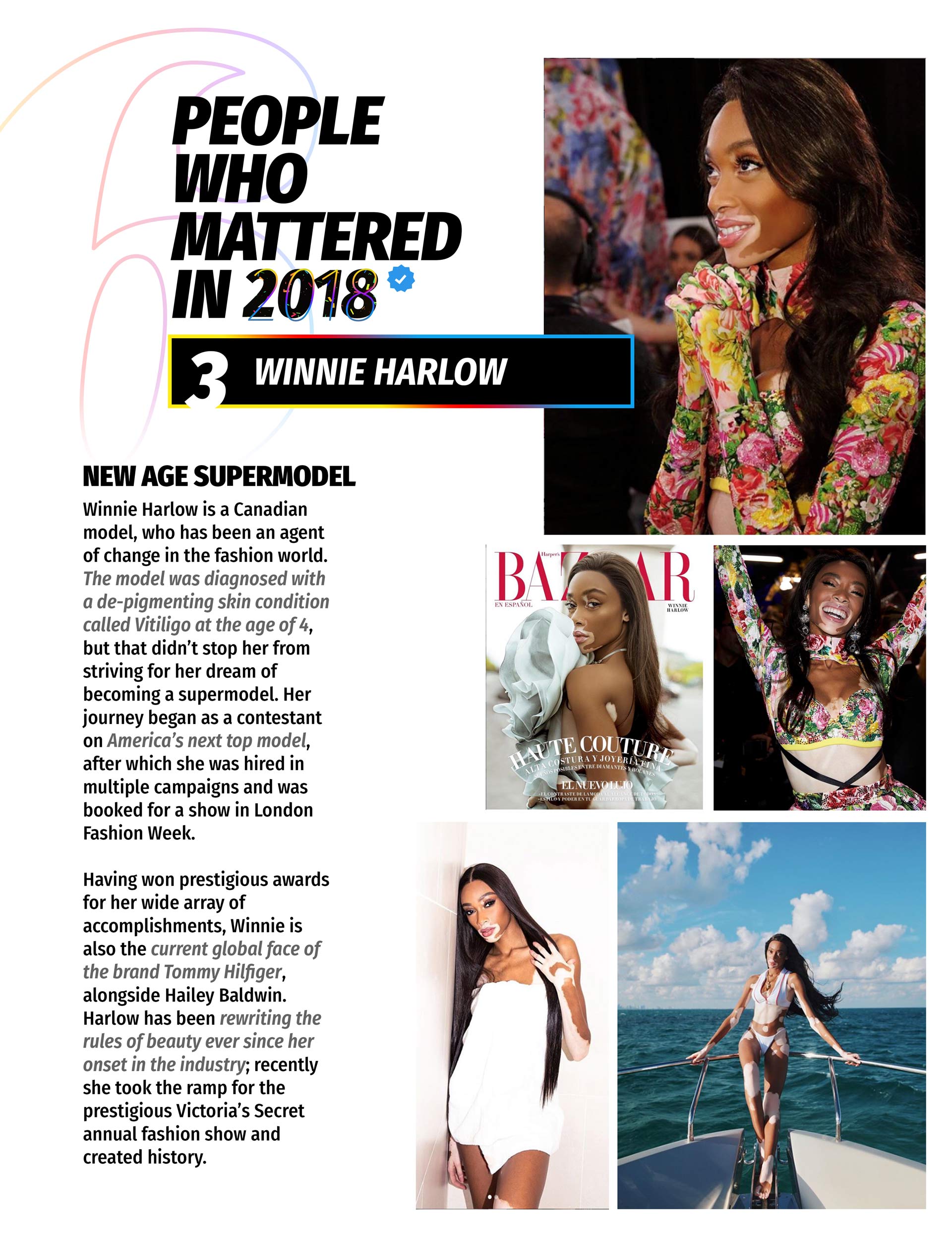 “Winnie Harlow is a Canadian model, who has been an agent of change in the fashion world. The model was diagnosed with a de-pigmenting skin condition called Vitiligo at the age of 4, but that didn’t stop her from striving for her dream of becoming a supermodel. Her journey began as a contestant on America’s next top model, after which she was hired in multiple campaigns and was booked for a show in London Fashion Week. Having won prestigious awards for her wide array of accomplishments, Winnie is also the current global face of the brand Tommy Hilfiger, alongside Hailey Baldwin. Harlow has been rewriting the rules of beauty ever since her onset in the industry; recently she took the ramp for the prestigious Victoria’s Secret annual fashion show and created history.” 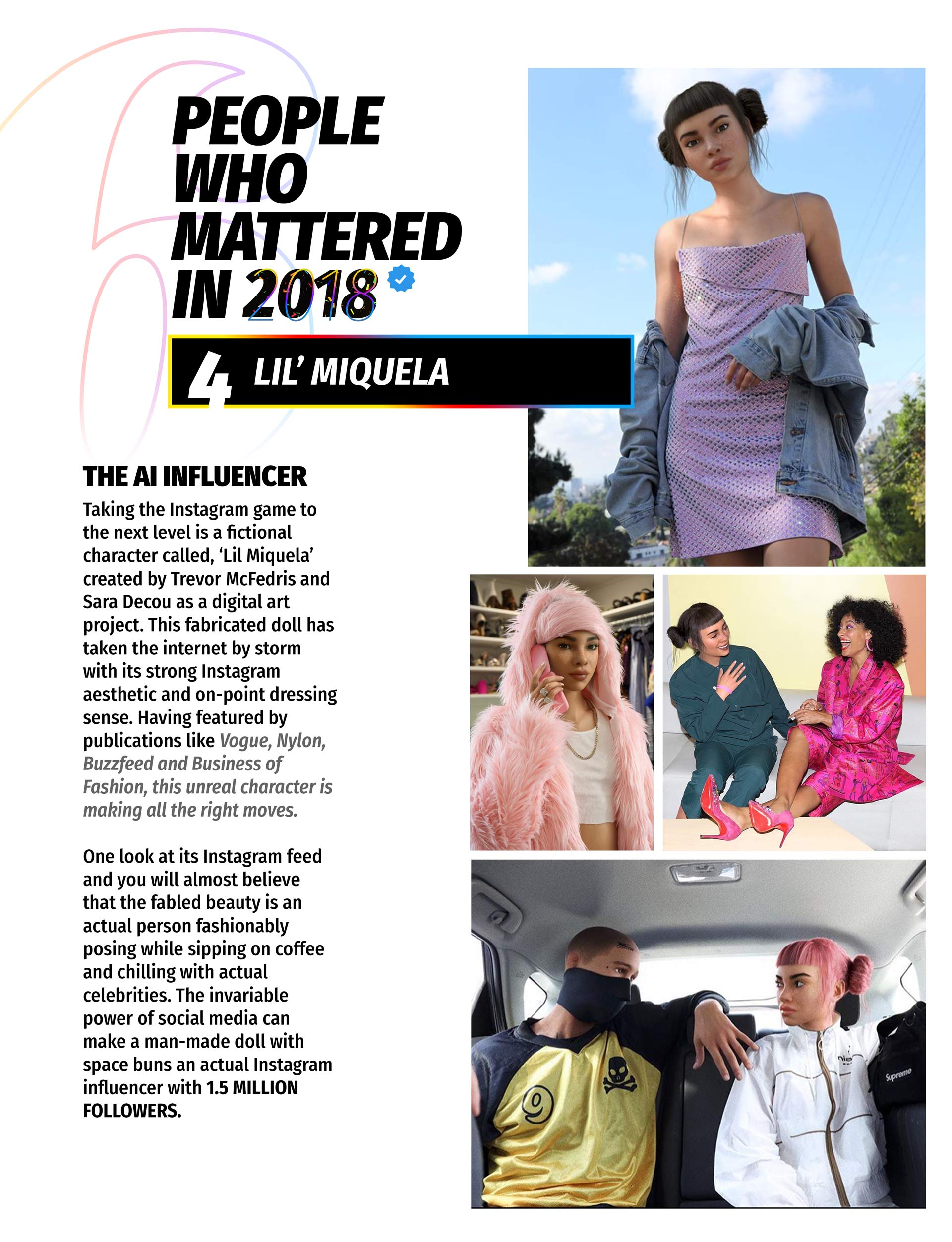 “Taking the Instagram game to the next level is a fictional character called, ‘Lil Miquela’ created by Trevor McFedris and Sara Decou as a digital art project. This fabricated doll has taken the internet by storm with its strong Instagram aesthetic and on-point dressing sense. Having featured by publications like Vogue, Nylon, Buzzfeed and Business of Fashion, this unreal character is making all the right moves. On look at its Instagram feed and you will almost believe that the fabled beauty is an actual person fashionably posing while sipping on coffee and chilling with actual celebrities. The invariable power of social media can make a man-made doll with space buns an actual Instagram influencer with 1.5 million followers.” 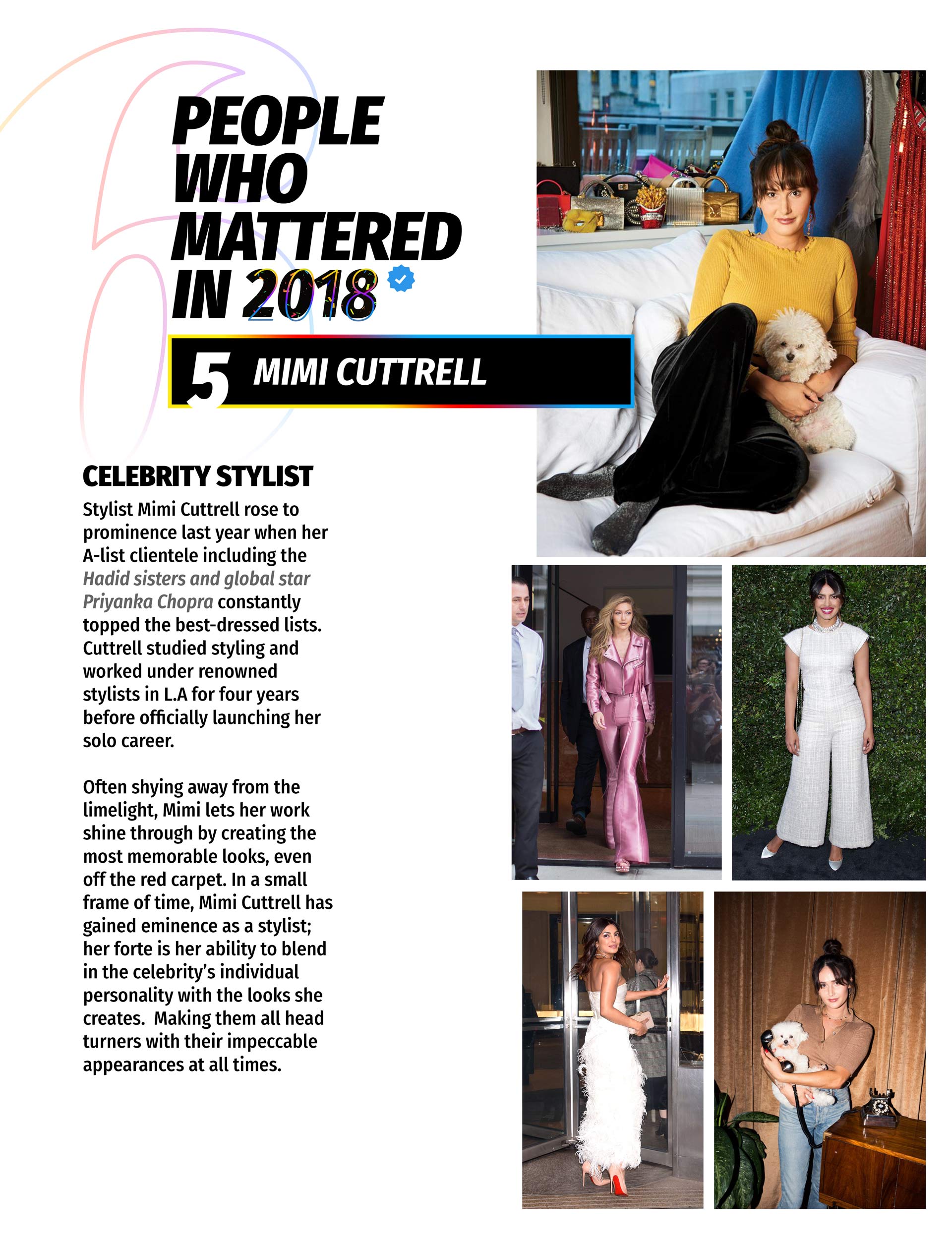 “Stylist Mimi Cutrell rose to prominence last year when her A-list clientele including the Hadid sisters and global star Priyanka Chopra constantly topped the best-dressed lists. Cutrell studied styling and worked under renowned stylists in L.A for four years before officially launching her solo career. Often shying away from the limelight, Mimi lets her work shine through by creating the most memorable looks, even off the red carpet. In a small frame of time, Mimi Cutrell has gained eminence as a stylist; her forte is her ability to blend in the celebrity’s individual personality with the looks she creates. Making them all head turners with their impeccable appearances at all times. ” 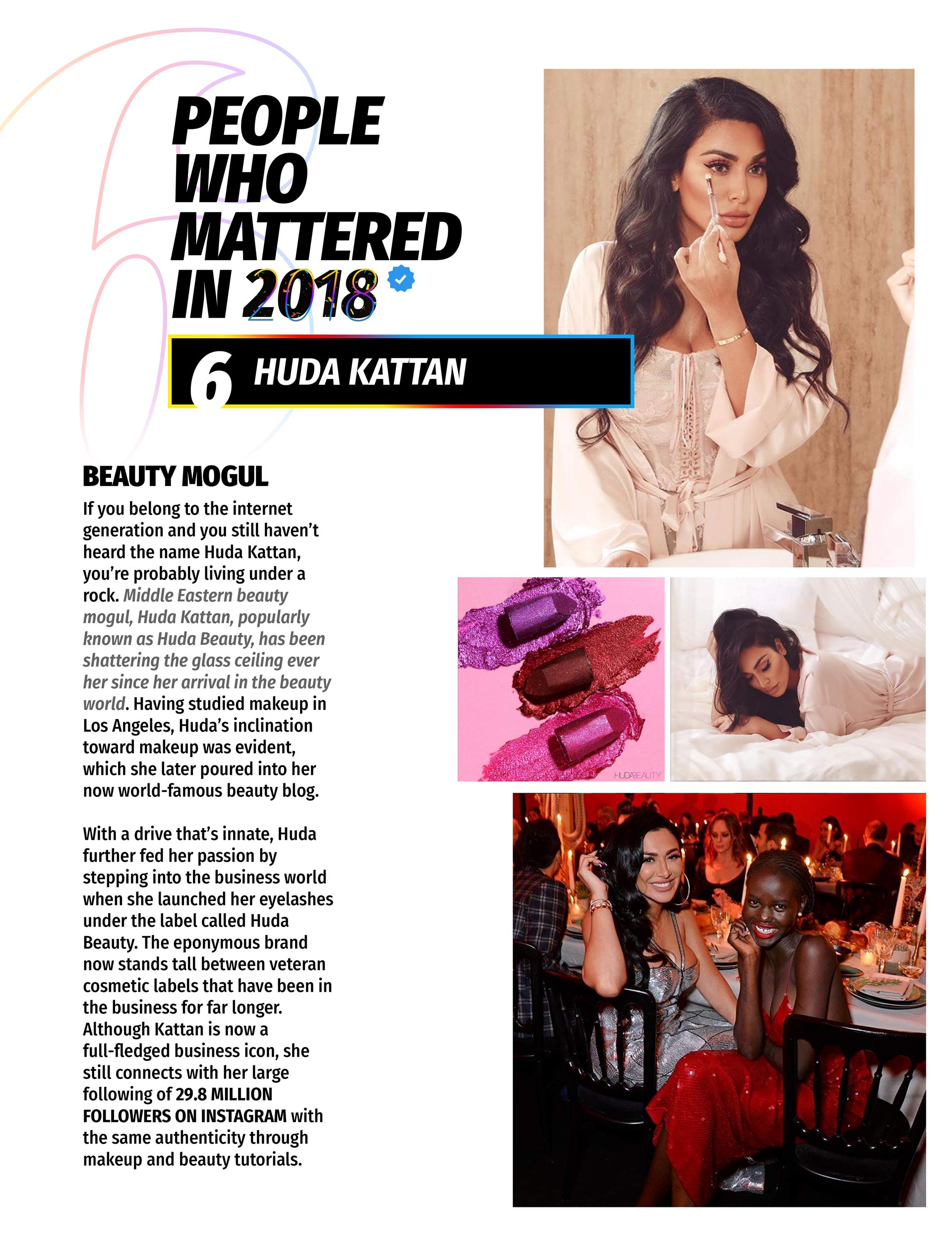 “If you belong to the internet generation and you still haven’t heard the name Huda Kattan, you’re probably living under a rock. Middle Eastern beauty Moghul, Huda Kattan, popularly known as Huda beauty, has been shattering the glass ceiling ever her since her arrival in the beauty world. Having studied makeup in Los Angeles, Huda’s inclination toward makeup was evident, which she later poured into her now world-famous beauty blog. With a drive that innate, Huda further fed her passion by stepping into the business world when she launched her eyelashes under the label called Huda Beauty. The eponymous brand now stands tall between veteran cosmetic labels that have been in the business for far longer. Although Kattan is now a full-fledged business icon, she still connects with her large following of 29.8 million followers on Instagram with the same authenticity through makeup and beauty tutorials.”

SONG OF THE CASTLE

QUEEN OF THE DESERT