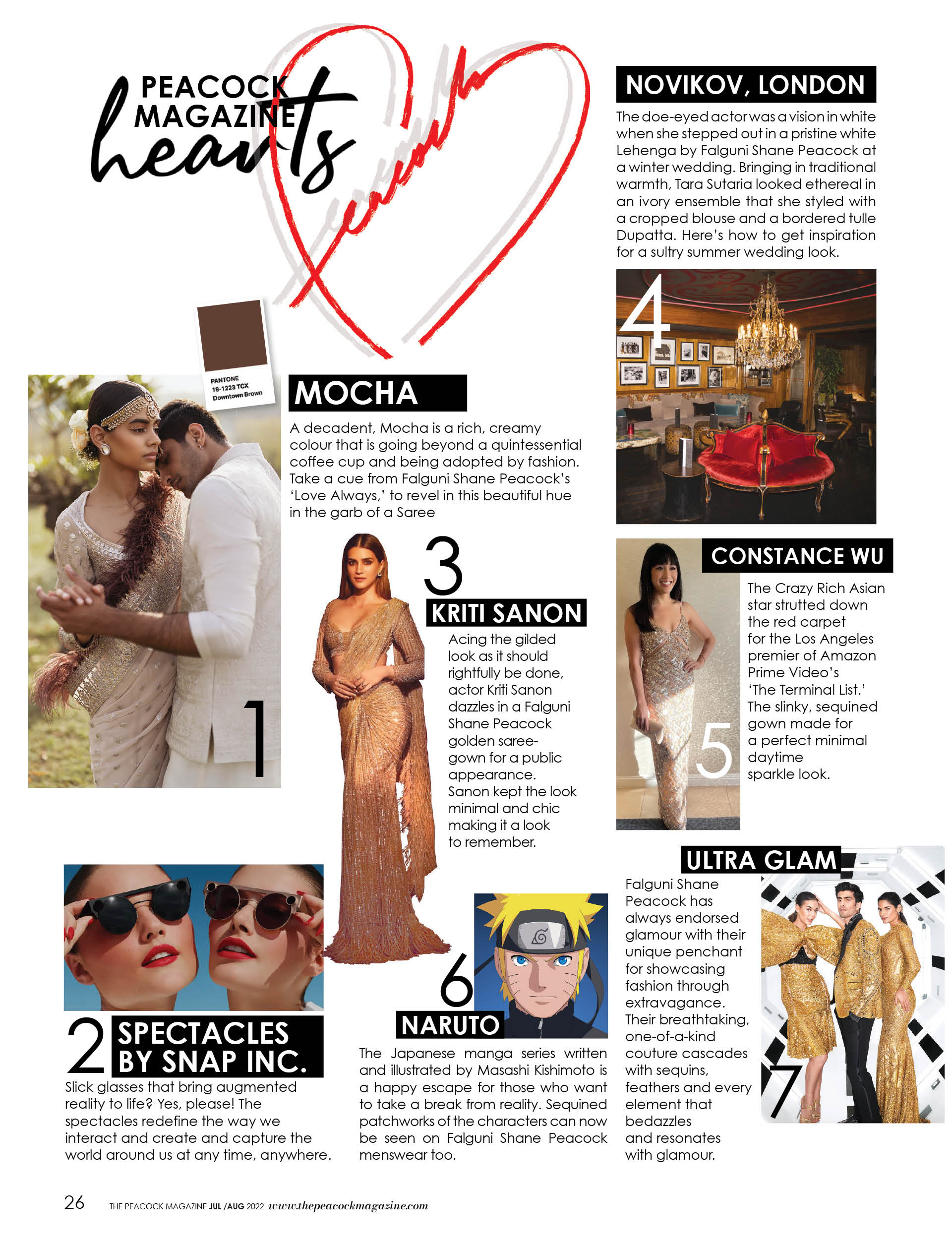 [1] MOCHA
A decadent shade of brown, Mocha is a rich, creamy colour that is going beyond a quintessential coffee cup and being adopted by fashion. Take a cue from Falguni Shane Peacock’s ‘Love Always,’ to revel in this beautiful hue in the garb of a Saree

[2] SPECTACLES BY SNAP INC
Slick glasses that bring augmented reality to life? Yes, please! The spectacles redefine the way we interact and create and capture the world around us at any time, anywhere.

[3] KRITI SANON
Acing the gilded look as it should rightfully be done, actor Kriti Sanon dazzles in a Falguni Shane Peacock golden saree-gown for a public appearance. Sanon kept the look minimal and chic making it a look to remember.

[4] NOVIKOV, LONDON
The doe-eyed actor was a vision in white when she stepped out in a pristine white Lehenga by Falguni Shane Peacock at a winter wedding. Bringing in traditional warmth, Tara Sutaria looked ethereal in an ivory ensemble that she styled with a cropped blouse and a bordered tulle Dupatta. Here’s how to get inspiration for a sultry summer wedding look.

[5] CONSTNCE WU
The Crazy Rich Asian star strutted down the red carpet for the Los Angeles premier of Amazon Prime Video’s ‘The Terminal List.’ The slinky, sequined gown made for a perfect minimal daytime sparkle look.

[6] NARUTO
The Japanese manga series written and illustrated by Masashi Kishimoto is a happy escape for those who want to take a break from reality. Sequined patchworks of the characters can now be seen on Falguni Shane Peacock menswear too.

[7] ULTRA GLAMOUROUS
Falguni Shane Peacock has always endorsed glamour with their unique penchant for showcasing fashion through extravagance. Their breathtaking, one-of-a-kind couture cascades with sequins, feathers and every element that bedazzles and resonates with glamour. 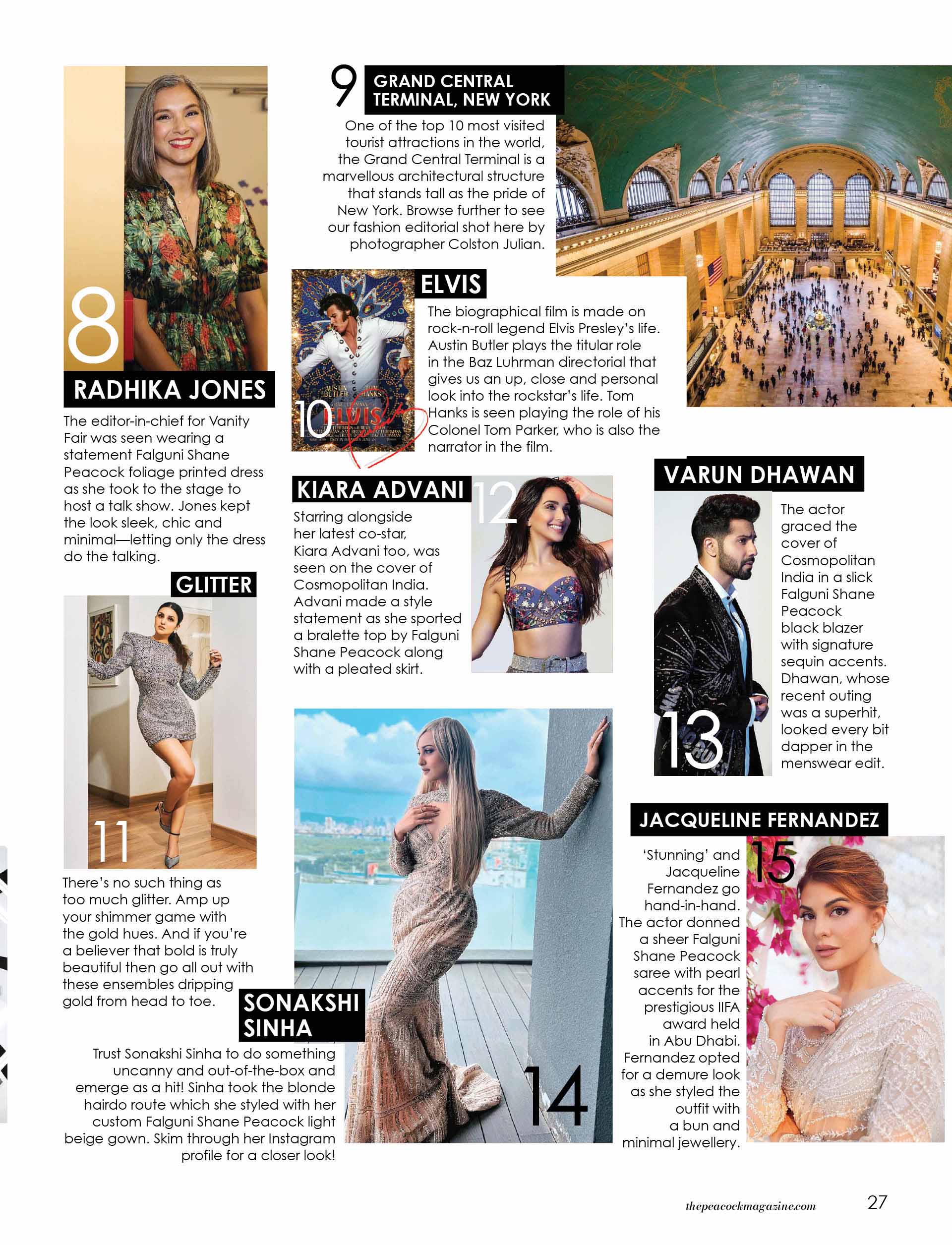 [8] RADHIKA JONES
The editor-in-chief for Vanity Fair was seen wearing a statement Falguni Shane Peacock foliage printed dress as she took to the stage to host a talk show. Jones kept the look sleek, chic and minimal—letting only the dress do the talking.

[9] GRAND CENTRAL TERMINAL, NEW YORK
One of the top 10 most visited tourist attractions in the world, the Grand Central Terminal is a marvellous architectural structure that stands tall as the pride of New York. Browse further to see our fashion editorial shot here by photographer Colston Julian.

[10] ELVIS
The biographical film is made on rock-n-roll legend Elvis Presley’s life. Austin Butler plays the titular role in the Baz Luhrman directorial that gives us an up, close and personal look into the rockstar’s life. Tom Hanks is seen playing the role of his Colonel Tom Parker, who is also the narrator in the film.

[11] LITTER
There’s no such thing as too much glitter. Amp up your shimmer game with the gold hues. And if you’re a believer that bold is truly beautiful then go all out with these ensembles dripping gold from head to toe.

[12] KIARA ADVANI
Starring alongside her latest co-star, Kiara Advani too, was seen on the cover of Cosmopolitan India. Advani made a style statement as she sported a bralette top by Falguni Shane Peacock along with a pleated skirt.

[13] VARUN DHAWAN
The actor graced the cover of Cosmopolitan India in a slick Falguni Shane Peacock black blazer with signature sequin accents. Dhawan, whose recent outing was a superhit, looked every bit dapper in the menswear edit.

[14] SONAKSHI SINHA
Trust Sonakshi Sinha to do something uncanny and out-of-the-box and emerge as a hit! Sinha took the blonde hairdo route which she styled with her custom Falguni Shane Peacock light beige gown. Skim through her Instagram profile for a closer look!

[15] JACQUELINE FERNANDEZ
‘Stunning’ and Jacqueline Fernandez go hand-in-hand. The actor donned a sheer Falguni Shane Peacock saree with pearl accents for the prestigious IIFA award held in Abu Dhabi. Fernandez opted for a demure look as she styled the outfit with a bun and minimal jewellery.