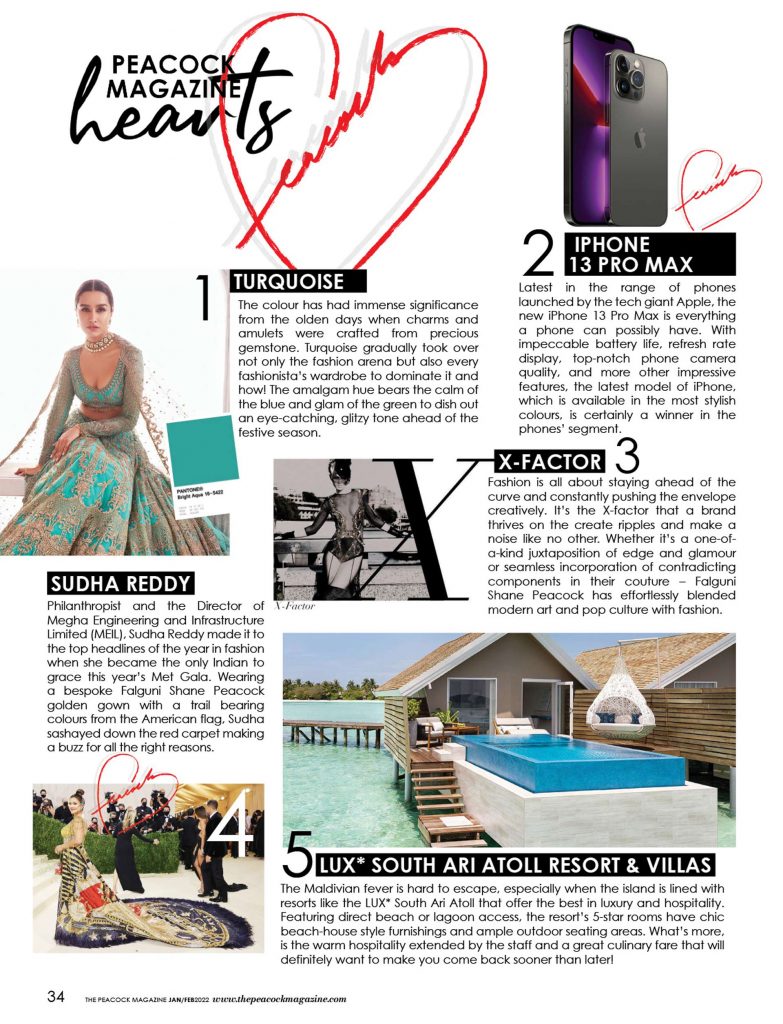 [1] Turquoise
The colour has had immense significance from the olden days when charms and amulets were crafted from precious gemstones. Turquoise gradually took over not only the fashion arena but also every fashionista’s wardrobe to dominate it and how! The amalgamated hue bears the calm of blue and the glam of green to dish out an eye-catching, glitzy tone ahead of the festive season.

[2] iPhone 13 Pro Max
Latest in the range of phones launched by tech giant Apple, the new iPhone 13 Pro Max is everything a phone can possibly have. With impeccable battery life, refresh rate display, top-notch phone camera quality, and several other impressive features, the latest model of iPhone, which is available in the most stylish colours, is certainly a winner in the phone segment.

[3] Sudha Reddy
Philanthropist and the director of Megha Engineering and Infrastructure Limited (MEIL), Sudha Reddy made it to the top headlines of the year in fashion when she became the only Indian to grace this year’s Met Gala. Wearing a bespoke Falguni Shane Peacock golden gown with a trail bearing colours from the American flag, Sudha sashayed down the red carpet making a buzz for all the right reasons.

[4] X-Factor
Fashion is all about staying ahead of the curve and constantly pushing the envelope creatively. It’s the X-factor that a brand thrives on creating ripples and making a noise like no other. Whether it’s a one-of-a-kind juxtaposition of edge and glamour or a seamless incorporation of contradicting components in their couture – Falguni Shane Peacock has effortlessly blended modern art and pop culture with fashion.

[5] LUX* SOUTH ARI ATOLL RESORT & VILLAS
The Maldivian fever is hard to escape, especially when the island is lined with resorts like the LUX* South Ari Atoll that offers the best in luxury and hospitality. Featuring direct beach or lagoon access, the resort’s 5-star rooms have chic beach-house style furnishings and ample outdoor seating areas. What’s more, the warm hospitality extended by the staff and a great culinary fare will definitely want to make you come back sooner than later! 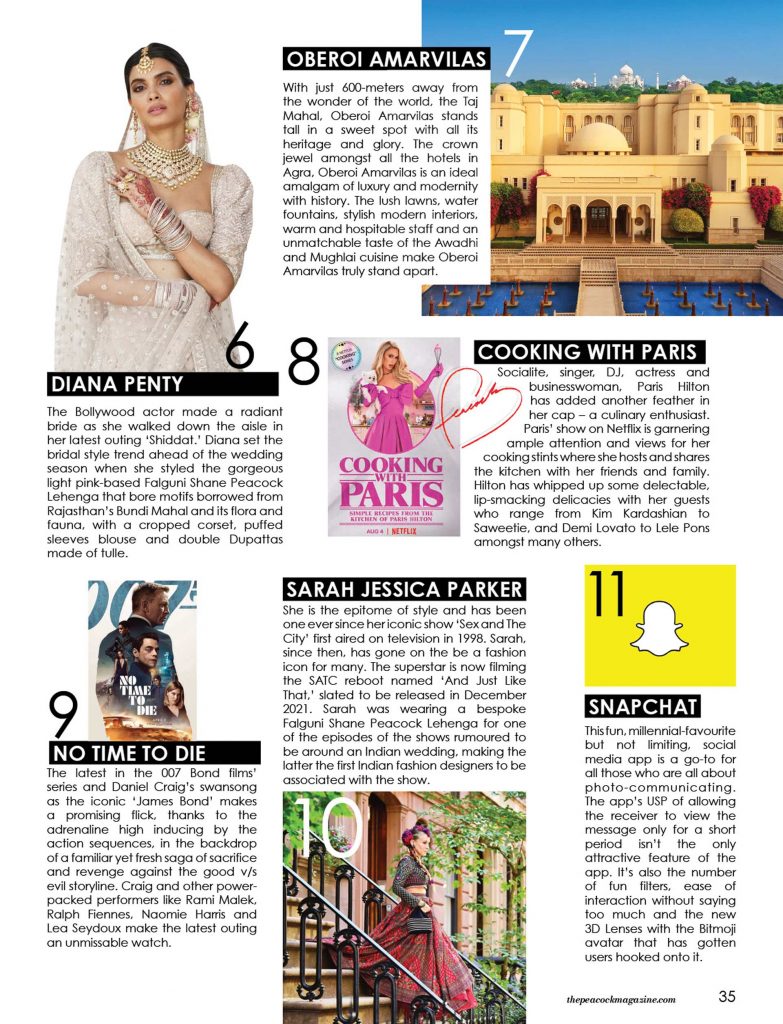 [6] Diana Penty
The Bollywood actor made a radiant bride as she walked down the aisle in her latest outing ‘Shiddat.’ Diana set the bridal style trend ahead of the wedding season when she styled the gorgeous light pink Falguni Shane Peacock Lehenga that bore motifs borrowed from Rajasthan’s Bundi Mahal and its flora and fauna. The ensemble featured a cropped corset, puffed sleeves blouse and double Dupattas made of tulle.

[7] Oberoi Amarvilas
Only 600 metres away from the Taj Mahal, Oberoi Amarvilas stands tall in a sweet spot with all its heritage and glory. The crown jewel amongst all the hotels in Agra, Oberoi Amarvilas is an ideal integration of luxury and modernity with history. The lush lawns, water fountains, stylish modern interiors, warm and hospitable staff and an unmatchable taste of Awadhi and Mughlai cuisines make Oberoi Amarvilas truly stand apart.

[8] Cooking with Paris
Socialite, singer, DJ, actress and businesswoman, Paris Hilton has added another feather in her cap – that of a culinary enthusiast. Hilton’ show Cooking with Paris is garnering ample attention and views for her cooking stints where she hosts and shares the kitchen with her friends and family. Hilton has whipped up some delectable, lip-smacking delicacies with her guests that include a stellar line-up from Kim Kardashian to Saweetie, and Demi Lovato to Lele Pons amongst many others. Cooking with Paris is streaming on Netflix.

[9] No Time to Die
Set in the backdrop of a familiar, yet fresh saga of sacrifice and revenge, No Time to Die, the latest in the 007 Bond series and Daniel Craig’s swansong stirs an adrenaline rush thanks to the breathtaking action sequences. Craig and other power-packed performers like Rami Malek, Ralph Fiennes, Naomie Harris and Lea Seydoux make the latest outing an unmissable watch

[10] Sarah Jessica Parker
She is the epitome of style and has been one ever since her iconic show Sex and The City first aired on television in 1998. Parker, since then, has gone on to be a fashion icon in her own right. The superstar is now filming the SATC reboot named And Just Like That, slated to be released in December 2021. She was wearing a bespoke Falguni Shane Peacock Lehenga for one of the show’s episodes, which is rumoured to be around an Indian wedding, making the latter the first Indian fashion designers to be associated with the show.

[11] Snapchat
This fun, millennial-favourite but not limiting, social media app is a go-to for all those who are all about photo-communicating. The app’s USP of allowing the receiver to view the message only for a short period isn’t the only attractive feature of the app. It’s also the number of fun filters, ease of interaction without saying too much and the new 3D Lenses with the Bitmoji avatar that has gotten users hooked onto it.