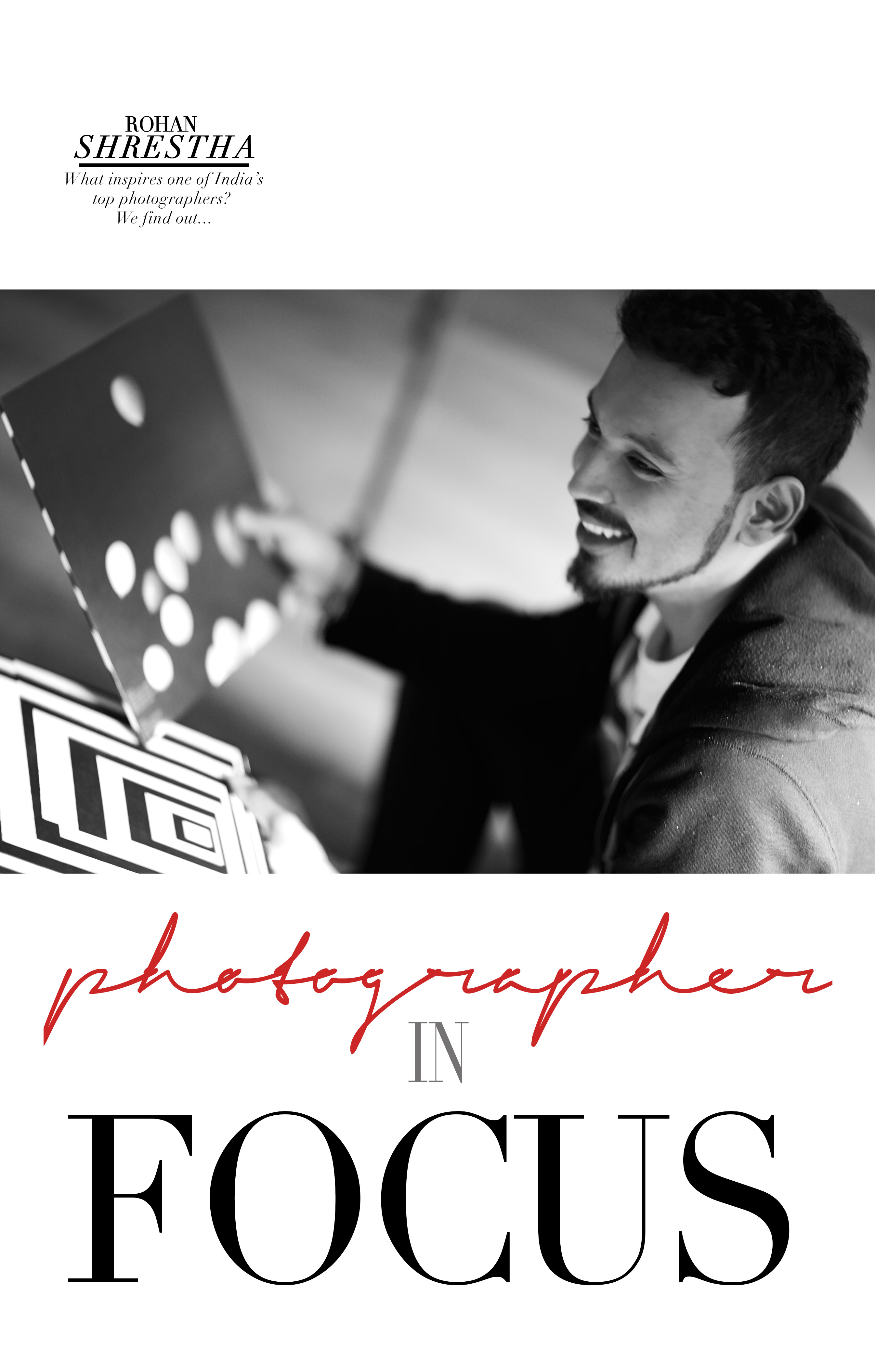 It’s one thing to take forward the legacy you’re endowed with – it’s another to make it your own. Photographer Rohan Shrestha has managed to do it both in less than no time. To be a successor to an industry legend like Rakesh Shrestha wasn’t an easy mantle to bear, but the young visionary has managed to do that while affixing his individual stature in Bollywood and fashion industry. The 33-year-old photographer has lensed every generation next star of this decade, but his fan boy moment remains to be his assignment with Bollywood’s original superstar, Amitabh Bachchan. While it’s easy to be configured in a particular genre, Shrestha defies the odds by his remarkable work beyond the glamour borders. His coverage of the Nepal earthquake could cause a stir even in the hardest of souls. Travel being a pivotal essence of his life, Rohan seeks inspiration from his nomadic experiences. Whether it’s his high-fashion editorials in the cosmopolitan cities, or his black and white series where he captures celebrities like Ranbir Kapoor, Alia Bhatt and Ranveer Singh in their raw element, Rohan has a parallel footing in it all. In a recent titillating encounter with the photographer, he talks about his favourite muse, the water sport he can’t get enough of and so much more.

1) HOW DO YOU MANAGE TO DO SOMETHING DIFFERENT WITH CELEBRITIES WHO HAVE ALREADY BEEN PHOTOGRAPHED BY VARIOUS PHOTOGRAPHERS IN VARIOUS DIFFERENT WAYS?
“I like doing things differently, my thought process differs from other people, and also because of the kind of celebrities I work with, trust me. They trust my thought process and my instinct. It is not always that they agree, but in the past some of them have, and that has resulted in crazy shoots. It became a niche for me and a large part of my growing years.”

2) TELL US ABOUT A SHOOT THAT ABSOLUTELY DID NOT GO AS PLANNED/ WENT ABSOLUTELY HAYWIRE!
“There are a lot of shoots that don’t go as planned, it’s not easy. Sometimes the brief changes last minute, especially when you work with actors, it’s a lot about improvisation. I cannot pick one particular shoot, or name one actor but things do get haywire at shoots.”

3) WHAT ACCORDING TO YOU HAS BEEN YOUR BEST WORK?
“I do various types of photography, I document, and I also shoot under water – fashion editorials, brand campaigns and advertising projects included. I have beautiful memories from all of these categories put together. Some of my first work will always top the list, shooting a cover with Ranbir Kapoor, when he was a just young budding actor and I was just a young photographer was major. Shooting campaigns for brands that I admired as a kid – these are the moments that make you feel like you’re living a dream as a photographer. Shooting Mr. Bachchan for instance, my knees were quivering – I was 26 or 27 years old at that time, shooting with heavy weight stars like Shahrukh Khan and Amir Khan have been my milestone moments. When I used my photography as a platform to document the Nepal earthquake and shot under water for the first time, were also some of my treasured moments.”

4) IS THERE SOMETHING YOU REALLY WANTED TO DO BUT STILL HAVEN’T GOTTEN THE OPPORTUNITY TO DO?
“Obviously as a photographer there were things I did want to do, but as time passes your priorities shift and when you grow older as a photographer you become more secure about your work. You also become secure about what you want. I don’t want to climb an Everest anymore, and chase people, I want to do good quality work with the tools I have and the clientele I have and make a difference in the industry. Not just fashion, but the other industries I am a part of.”

5) WHO ACCORDING TO YOU IS THE MOST PHOTOGENIC PERSON YOU HAVE PHOTOGRAPHED? / WHO WOULD YOU LOVE TO PHOTOGRAPH AND STILL HAVEN’T GOTTEN THE CHANCE TO?
“Just for the smile, I think the most photogenic person to me is Sonam Kapoor. Again, I may sound biased because we are friends. The person I would like to photograph is Raghu Rai – he is one of the pioneering photographers in India.”

6) WHAT IS YOUR FAVOURITE PHOTOGRAPHING STYLE OF ALL TIMES?
“My white t-shirt series is my all-time favourite. It’s a concept where I started working with the celebrities, without a lot of hair and make-up and minus the retouching. They are dressed in basic white t-shirts and ganjis and I shoot black and white portraits of them.”

7) IF NOT A PHOTOGRAPHER, WHAT WOULD YOU BE?
“I would have done something in sports; maybe, I would have become a footballer.”

8) WHICH IS THE MOST PICTURESQUE LOCATION IN THE WORLD?
“Ladakh”

9) WHERE DO YOU SEEK INSPIRATION FROM?
“Travel”

10) ONE THING YOU LOVE AND ONE THING YOU HATE ABOUT YOUR JOB?
“The thing I love about my job is that it keeps me on my toes and keeps me motivated – the thing that I hate is deadlines, especially the ones that are very close.”

11) YOUR FAVOURITE PLACE IN THE WORLD?
“Peru”

12) THE WORD/PHRASE YOU USE THE MOST?
“You should censor that, ha-ha. I have a very flowery way of speaking.”

13) WHICH PICTURE TAKEN BY YOU “SAYS A THOUSAND WORDS”?
“The pictures I documented during the Nepal earthquake.”