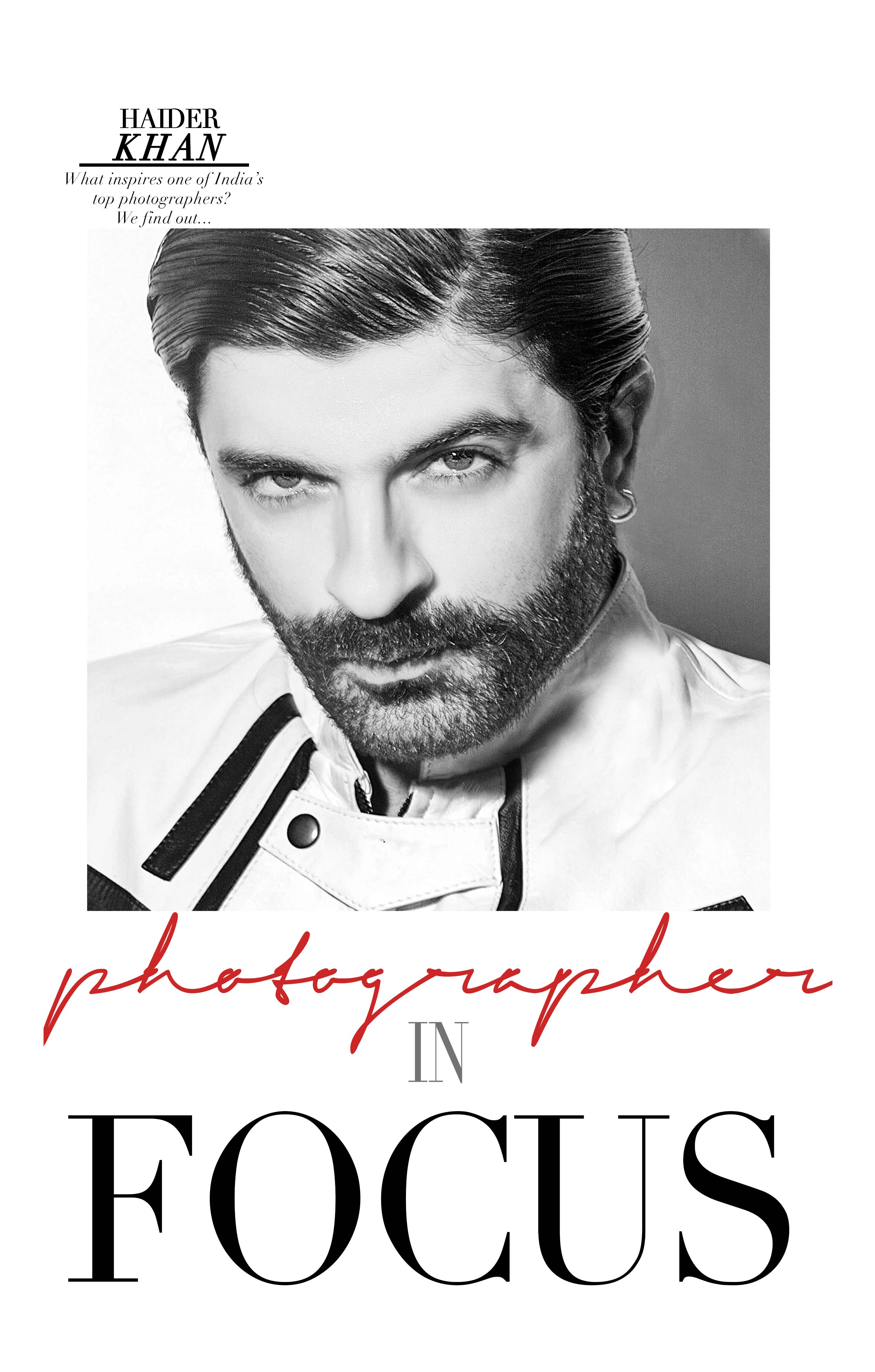 Famed photographer Haider Khan is a creative genius who has excelled in both still and motion photography. Khan is often inspired by his everyday surroundings, which he flawlessly incorporates in his innovative work. As an avid traveller, locations play a pivotal role in his photography; Haider assimilates the subject of his stories with the picturesque backdrops he’s shooting at, creating a unique canvas to depict his vision. His inclination towards landscape photography is evident in his large body of impressive work. Having lensed a number of high fashion models and celebrities, his most memorable moment remains to be when he captured Bollywood megastar Salman Khan. In a quick tête-â- tête, the photographer spoke about his best work, the photography style he wants to experiment with and the celebrity he wants to capture next.

1) HOW WOULD YOU DISTINGUISH YOURSELF/ YOUR PHOTOGRAPHY STYLE FROM OTHER PHOTOGRAPHERS IN THE COUNTRY?
“I don’t want to sound pompous and try to distinguish myself from others, but I believe the kind of work I have done, says it all. From real war zone documentaries, advertisements, music videos, documentaries on sick children to capturing Hollywood celebrities, art and culture and sports players.”

2) HOW DO YOU MANAGE TO DO SOMETHING DIFFERENT WITH CELEBRITIES WHO HAVE ALREADY BEEN PHOTOGRAPHED BY VARIOUS PHOTOGRAPHERS IN VARIOUS DIFFERENT WAYS?
“Just don’t tell ask to do a certain kind of pose, let them be themselves and you will get the best shot out of them.”

3) TELL US ABOUT A SHOOT THAT ABSOLUTELY DID NOT GO AS PLANNED/ WENT ABSOLUTELY HAYWIRE!
“It has to be the shoot in Goa, where I partied until 6 am and the shoot was scheduled for 7, I wore glasses to conceal my sleepiness but I passed out in the middle of the shoot and we had to reschedule. I never repeated that mistake again.”

4) IS THERE SOMETHING YOU REALLY WANTED TO DO BUT STILL HAVEN’T GOTTEN THE OPPORTUNITY TO DO?
“I want to direct my first feature film with my script and vision.”

5) WHO DID YOU LOVE WORKING WITH THE MOST?
“Salman Khan”

6) WHO ACCORDING TO YOU IS THE MOST PHOTOGENIC PERSON YOU HAVE PHOTOGRAPHED? / WHO WOULD YOU LOVE TO PHOTOGRAPH AND STILL HAVEN’T GOTTEN THE CHANCE TO?
“Vidyut Jamwal is the most photogenic person I have shot and I would like to shoot the current Prime Minister of Pakistan, Imran Khan.”

7) WHAT IS YOUR FAVOURITE PHOTOGRAPHING STYLE OF ALL TIMES?
“Surely not Monochrome, my favourite is horizontal landscape in colour 70mm.”

8) IF NOT A PHOTOGRAPHER, WHAT WOULD YOU BE?
“Indian Para Commando”

9) WHICH IS THE MOST PICTURESQUE LOCATION IN THE WORLD?
“India & Italy ”

11) ONE THING YOU LOVE AND ONE THING YOU HATE ABOUT YOUR JOB?
“I love everything about my job, but I don’t like if I have to shoot people or locations I’m not fond of. ”

12) YOUR FAVOURITE PLACE IN THE WORLD?
“Italy ”

13) THE WORD/PHRASE YOU USE THE MOST?
“The word I use very often is enjoy ”

14) WHICH PICTURE THAT WAS TAKEN BY YOU “SAYS A THOUSAND WORDS”?
“Colombo Fashion Week, Srilanka, we were at Taj Samudra and our hotel was under attack by LTTE Fighter Planes Bombing. We were sent in the basement and I could hear the bombs and every one was so scared and the images I clicked during that time captured raw emotions.”