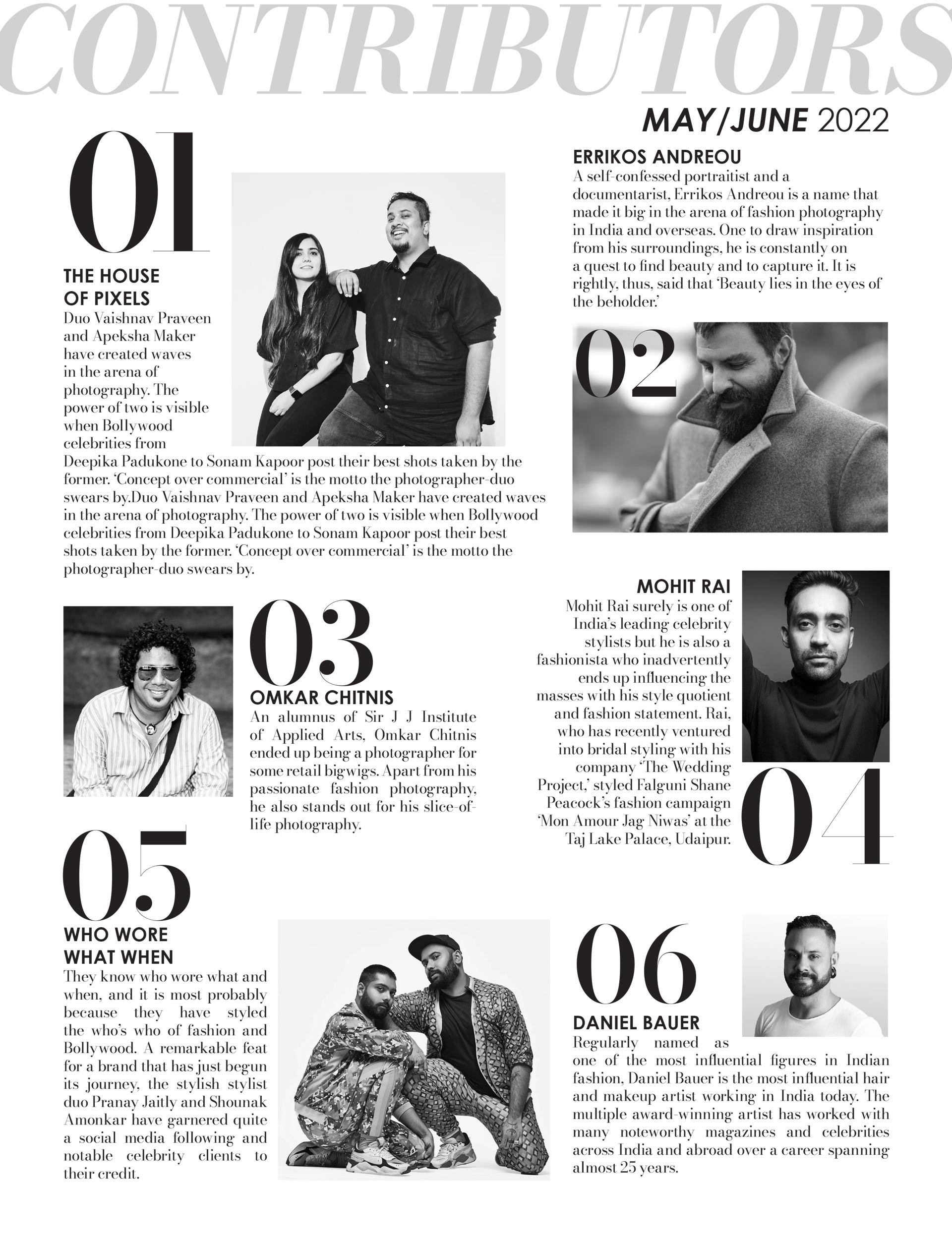 [1] The House of Pixels
Duo Vaishnav Praveen and Apeksha Maker have created waves in the arena of photography. The power of two is visible when Bollywood celebrities from Deepika Padukone to Sonam Kapoor post their best shots taken by the duo. ‘Concept over commercial’ is the motto the photographers swear by.

[2] Errikos Andreou
A self-confessed portraitist and a documentarist, Errikos Andreou is a name that made it big in the arena of fashion photography in India and overseas. One to draw inspiration from his surroundings, he is constantly on a quest to find beauty and to capture it. It is thus rightly said that ‘Beauty lies in the eyes of the beholder.’

[3] Omkar Chitnis
An alumnus of Sir J J Institute of Applied Arts, Omkar Chitnis ended up being a photographer for some retail bigwigs. Apart from his passionate fashion photography, he also stands out for his slice-of-life photography.

[4] Mohit Rai
Mohit Rai surely is one of India’s leading celebrity stylists but he is also a fashionista who inadvertently ends up influencing the masses with his style quotient and fashion statement. Rai, who has recently ventured into bridal styling with his company ‘The Wedding Project,’ styled Falguni Shane Peacock’s fashion campaign ‘Mon Amour Jag Niwas’ at the Taj Lake Palace, Udaipur.

[5] Who Wore What When
They know who wore what and when, and it is most probably because they have styled the who’s who of fashion and Bollywood. A remarkable feat for a brand that has just begun its journey, the stylish stylist duo Pranay Jaitly and Shounak Amonkar have garnered quite a social media following and notable celebrity clients to their credit. 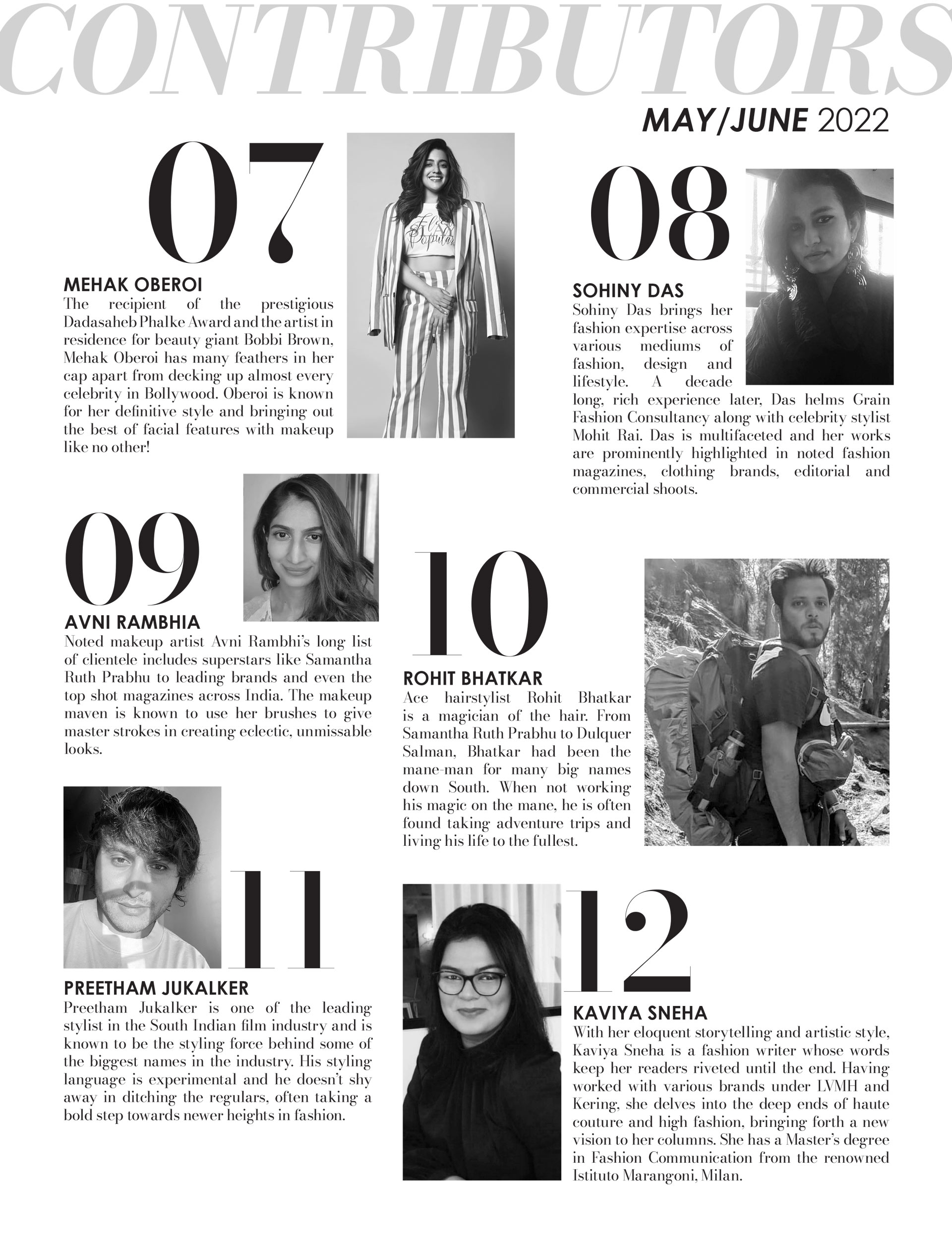 [7] Mehak Oberoi
The recipient of the prestigious Dadasaheb Phalke Award and the artist in residence for beauty giant Bobbi Brown, Mehak Oberoi has many feathers in her cap apart from decking up almost every celebrity in Bollywood. Oberoi is known for her definitive style and bringing out the best of facial features with makeup like no other!

[9] Avni Rambhia
Noted makeup artist Avni Rambhia’s long list of clientele includes superstars such as Samantha Ruth Prabhu to leading brands and even the top-notch magazines across India. The makeup maven is known to use her brushes to give master strokes in creating eclectic and unmissable looks.

[10] Rohit Bhatkar
Ace hairstylist Rohit Bhatkar is a magician of the hair. From Samantha Ruth Prabhu to Dulquer Salman, Bhatkar had been the mane-man for many big names down South. When not working his magic on the mane, he is often found taking adventure trips and living his life to the fullest.

[11] Preetham Jukalker
Preetham Jukalker is one of the leading stylists in the South Indian film industry, and is known to be the styling force behind some of the biggest names in the industry. His styling language is experimental and he doesn’t shy away from ditching the regulars, often taking a bold step towards newer heights in fashion.

[12] Kaviya Sneha
With her eloquent storytelling and artistic style, Kaviya Sneha is a fashion writer whose words keep her readers riveted until the end. Having worked with various brands under LVMH and Kering, she delves into the deep ends of haute couture and high fashion, bringing forth a new vision to her columns. She has a Master’s degree in Fashion Communication from the renowned Istituto Marangoni, Milan.