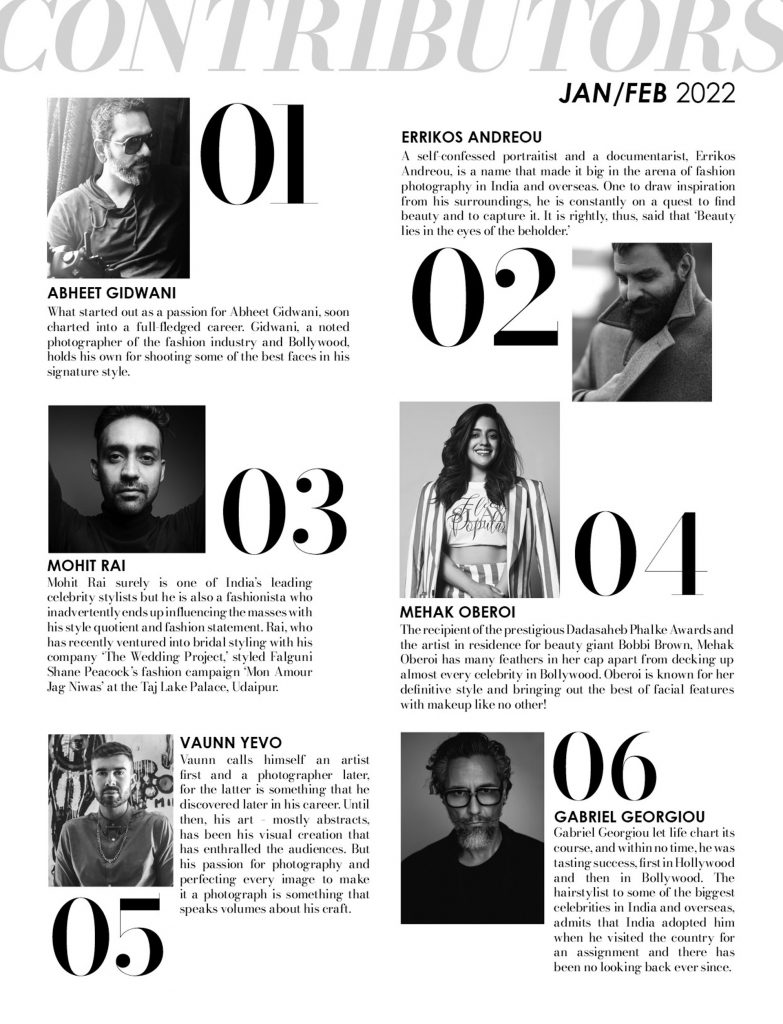 [1] ABHEET GIDWANI
What started out as a passion for Abheet Gidwani, soon charted into a full-fledged career. Gidwani, a noted photographer of the fashion industry and Bollywood, holds his own for shooting some of the best faces in his signature style.

[2] Errikos Andreou
A self-confessed portraitist and a documentarist, Errikos Andreou is a name that made it big in the arena of fashion photography in India and overseas. One to draw inspiration from his surroundings, he is constantly on a quest to find beauty and to capture it. It is rightly, thus, said that ‘Beauty lies in the eyes of the beholder.’

[3] Mohit Rai
Mohit Rai surely is one of India’s leading celebrity stylists but he is also a fashionista who inadvertently ends up influencing the masses with his style quotient and fashion statement. Rai, who has recently ventured into bridal styling with his company ‘The Wedding Project,’ styled Falguni Shane Peacock’s fashion campaign ‘Mon Amour Jag Niwas’ at the Taj Lake Palace, Udaipur.

[4] Mehak Oberoi
The recipient of the prestigious Dadasaheb Phalke Award and the artist in residence for beauty giant Bobbi Brown, Mehak Oberoi has many feathers in her cap apart from decking up almost every celebrity in Bollywood. Oberoi is known for her definitive style and bringing out the best of facial features with makeup like no other!

[5] Vaunn Yevo
Vaunn calls himself an artist first and a photographer later, for the latter is something that he discovered later in his career. Until then, his art – mostly abstract – has been his visual creation that enthralled the audiences. But his passion for photography and perfecting every image to make it a photograph is something that speaks volumes about his craft.

[6] Gabriel Georgiou
Gabriel Georgiou let life chart its course, and within no time, he was tasting success, first in Hollywood and then in Bollywood. The hairstylist to some of the biggest celebrities in India and overseas, admits that India adopted him when he visited the country for an assignment and there has been no looking back ever since. 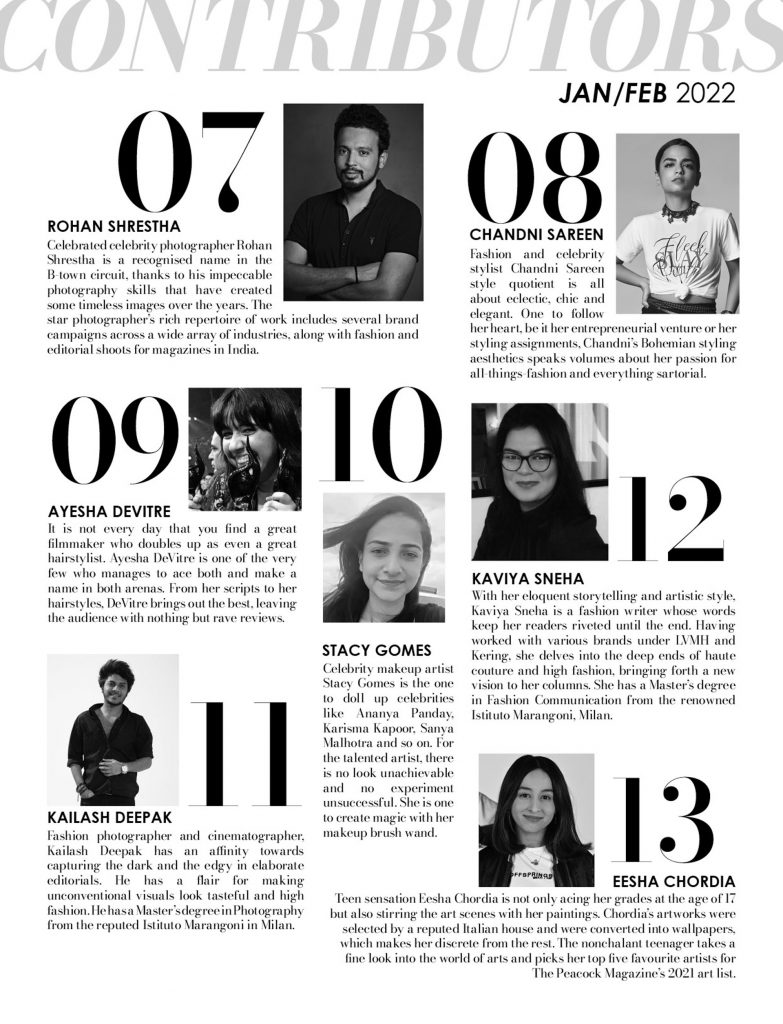 [7] Rohan Shrestha
Celebrated celebrity photographer Rohan Shrestha is a recognised name in the B-town circuit, thanks to his impeccable photography skills that have created some timeless images over the years. The star photographer’s rich repertoire of work includes several brand campaigns across a wide array of industries, along with fashion and editorial shoots for magazines in India.

[8] Chandni Sareen
Fashion and celebrity stylist Chandni Sareen’s style quotient is all about being eclectic, chic and elegant. The one to follow her heart, be it her entrepreneurial venture or her styling assignments, Chandni’s bohemian styling aesthetics speaks volumes about her passion for all-things-fashion and everything sartorial.

[10] Stacy Gomes
Celebrity makeup artist Stacy Gomes is the one to doll up celebrities like Ananya Panday, Karisma Kapoor, Sanya Malhotra and so on. For the talented artist, there is no look that is unachievable and no experiment unsuccessful. She is the one to create magic with her makeup brush wand.

[11] Kailash Deepak
Fashion photographer and cinematographer, Kailash Deepak has an affinity towards capturing the dark and the edgy in elaborate editorials. He has a flair for making unconventional visuals look tasteful and high fashion. He has a Master’s degree in Photography from the reputed Istituto Marangoni in Milan.

[12] Kaviya Sneha
With her eloquent storytelling and artistic style, Kaviya Sneha is a fashion writer whose words keep her readers riveted until the end. Having worked with various brands under LVMH and Kering, she delves into the deep ends of haute couture and high fashion, bringing forth a new vision to her columns. She has a Master’s degree in Fashion Communication from the renowned Istituto Marangoni, Milan.

[13] EESHA CHORDIA
Teen sensation Eesha Chordia is not only acing her grades at the age of 17 but also stirring the art scenes with her paintings. Chordia’s artworks were selected by a reputed Italian house and were converted into wallpapers, which makes her discrete from the rest. The nonchalant teenager takes a fine look into the world of arts and picks her top five favourite artists for The Peacock Magazine’s 2021 art list.