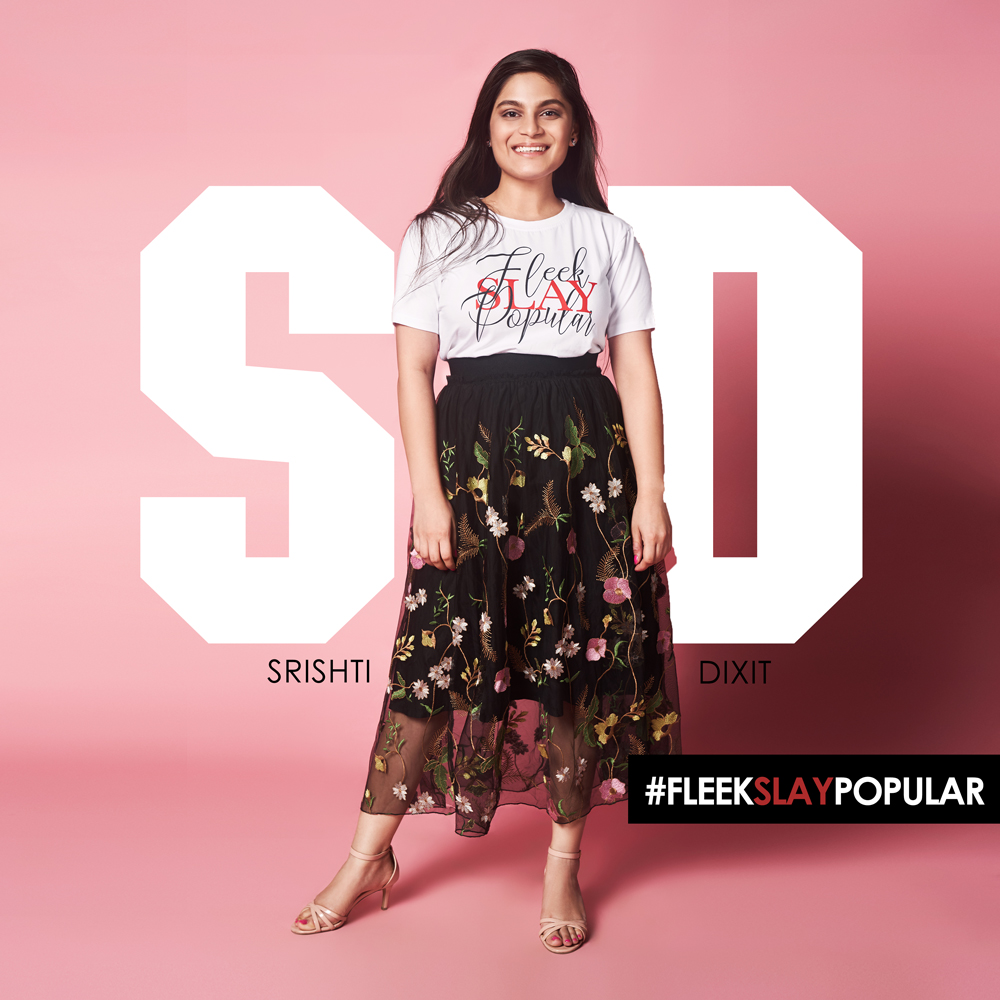 If you’re a 20 something millennial hooked on to the digital space, the chances of you not knowing the internet sensation, Srishti Dixit is very bleak. Her breakout video for Buzzfeed India about the iconic character, ‘poo’ from K3G, earned her instant popularity amongst the youth that has grown up watching Bollywood films. With every video, her content became more relevant and resonating with every young adult. Although her approach was comical, it always packed a subtle punch to the most prevalent issues of society. Apart from her impeccable comic timing, she is known to call a spade a spade and has managed to create a strong sense of repartee with her followers. While it is almost impossible to not break into a fit of laughter around her, we still managed to ask her a few questions about how she does what she does with so much ease, at the #iamfsp2.0 t-shirt launch. Here’s a break-down of the conversation.

1) HOW DO YOU MANAGE TO TAP IMPORTANT SOCIAL ISSUES IN A COMICAL WAY THROUGH YOUR CONTENT?
“I just simply exist in this beautiful country called India, where every real-life situation is just hilarious if you just look closely enough, and I honestly don’t have to do much exaggeration when I’m making my comedy content because it’s already quite hilarious, so I don’t find it very hard I just open my eyes and observe people around me and situations around me and that becomes great content.”

2) IN A FIELD OF INFLUENCERS, HOW DID YOU MANAGE TO CREATE YOUR OWN NICHE?
“I can’t say it myself that I have created a niche, but if others look at my work and think that I have then that’s great. All I do is make things that make me happy and make things that I would like to see in the world, and being myself comes most naturally and organically to me so I don’t cover it up in other pretences, and if people relate and respond to it, that’s great for me.”

3) WHAT ARE THE UPSIDE AND THE DOWNSIDE OF DIGITAL FAME?
“The upside of digital fame is money, you make lots of it, and the downside is the crushing social responsibility of being flawless all the time in front of a bunch of people who look up to you and want your life, or think of you as a role model. I still feel pretty uncomfortable about that position because I don’t think I should be looked up to at all, I am not a role model. I am actually a bad influence; I’d like to tell this to a lot of impressionable young people, who watch me on a daily basis, don’t look up to me, do your thing, make your own mistakes, and I just assume that whoever is following me is following me because they like this random girl on the internet who is just living her life with her cat and as long as you’re responding to that, it’s great, please don’t think that I’m better than anyone because I’m not, I’m probably worse, I’m full of flaws, constantly screwing up, I’m constantly making mistakes, and I’m constantly learning and evolving.”

4) BEING AN INFLUENCER NOW, DO YOU FEEL THE CONSTANT PRESSURE TO DRESS-UP GLAMOROUSLY WHILE MAKING APPEARANCES?
“I guess, if I had to be cool and edgy I’d say no but if I have to keep it real I’d say yes, because when everybody around you is dressed pretty, just to fit in you have to conform to a lot of standards, but I guess on Instagram and all my other social media presence I try to keep a healthy balance of both because I do like to dress up I do like to look pretty I do like to put on makeup and I also like to sit in my house wear my middle-class nighties and make my stupid videos. I can be both people and I like to explore both the identities and just have fun with both of them.”

5) AT A RECENTLY HELD AWARD SHOW, YOU LOOKED AMAZING IN A RED PANTSUIT, TELL US MORE ABOUT THAT LOOK?
“So I thought everybody there would be doing dresses, or like flouncy skirts, and I just wanted something really comfortable and something really powerful looking, so I decided I’ll wear a pantsuit and I’m glad it worked out and everybody kind of liked it.”