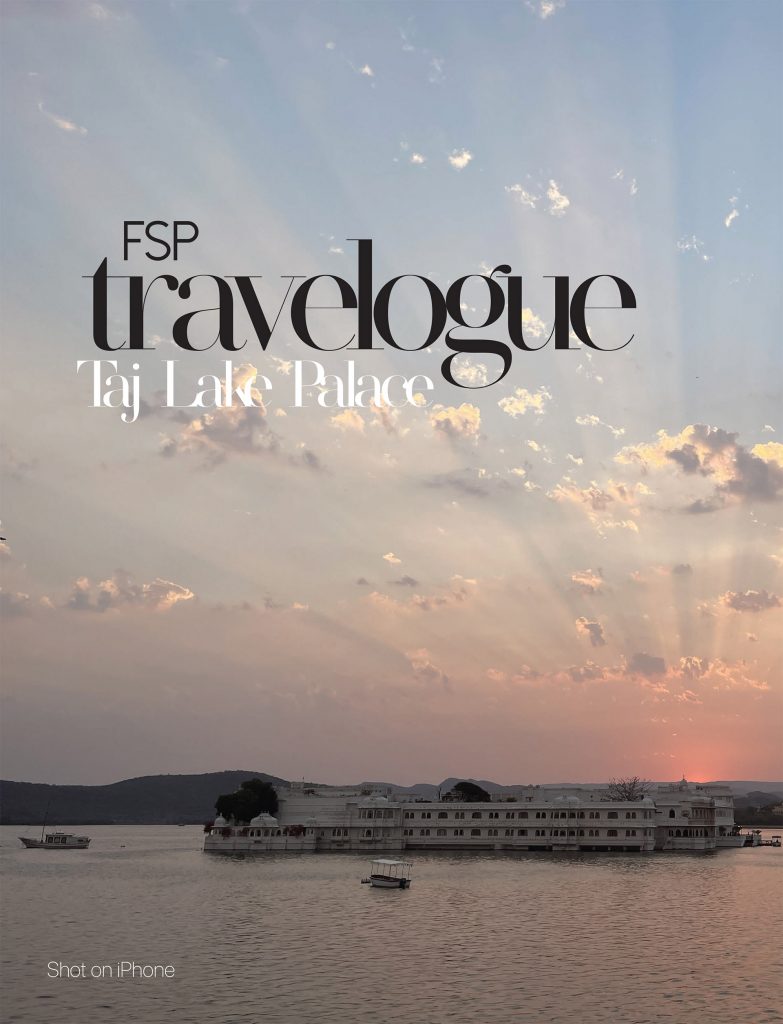 They say, “It is only when you are lost that you truly find yourself.” While it may not be the first time that we found ourselves being completely lost in the beauty and the paradise that Rajasthan is, but the moment we stepped into Jag Niwas, which is now famously known as the Taj Lake Palace in Udaipur, we knew we were about to unravel an exquisite journey of beauty.

Rajasthan and the palaces have always been an unending source of inspiration for us. We have borrowed from their magnificence for many of our previous creations, and we still find ourselves leaning toward the intricacies of each of its architectural and cultural structures. When we learnt about the backstory of the Taj Lake Palace we were intrigued to set off in its direction to learn more and be absorbed in its splendidness. 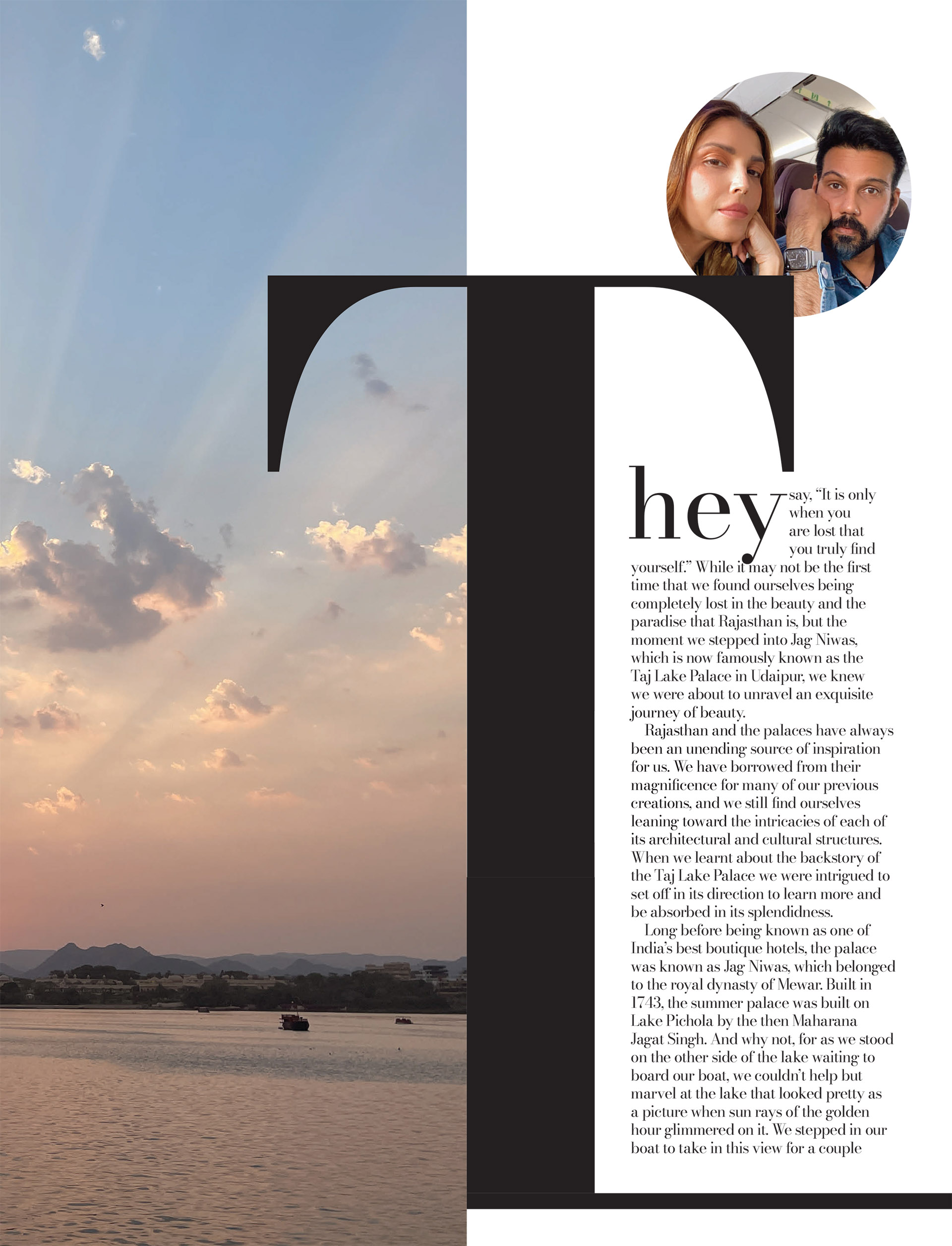 Long before being known as one of India’s best boutique hotels, the palace was known as Jag Niwas, which belonged to the royal dynasty of Mewar. Built in 1743, the summer palace was built on Lake Pichola by the then Maharana Jagat Singh. And why not, for as we stood on the other side of the lake waiting to board our boat, we couldn’t help but marvel at the lake that looked pretty as a picture when sun rays of the golden hour glimmered on it. We stepped in our boat to take in this view for a couple of minutes more only to be welcomed by a set of courteous staff at the patio with a filigree-detailed gateway made of wrought iron. We turned back to see the sunset from this view and wished we could hold that moment forever. After being welcomed graciously, we were given an expansive tour of the boutique hotel by the staff who shared the historical importance of the structure. The palace that was built by the king may not be in the same shape, but it was restored to its pristine glory by the leading hospitality group in India and abroad, in 1971. The hotel too, just like the palace, offers stunning views of the Lake Pichola, the neighbouring City Palace (we made a little note of visiting this too during our two-day stay here) at the Aravalli Hills, the Machla Magra Hills, and Jag Mandir. We were told that each of the 65 luxurious rooms and 10 grand suits offered a breathtaking view, which got us intrigued about our suite and the view we would have for the next two days. Walking through the hotel, we were taken to one of the most spectacular spots in the hotel, which was a teal blue pond right amidst the courtyard. Surrounded by the pristine walls of the palace and lined with bountiful bunches of flowers, the pond made a beautiful set-up. It was love at first sight for us, which we made official when we eventually named the palace-inspired collection ‘Mon Amour Jag Niwas.’ We instantly visualized a wedding where the bride and the groom would steal a moment with each other during their wedding frenzy, or the bridesmaids would hatch fun plans to steal the groom’s Juttis, the groomsmen would share a laugh about their good ol’ days, or the family would pose away to glory against the pond. The heritage hotel, in no time, doubled up as a wedding set-up and we knew how much we wanted to capture the beauty of the place against our ensembles.
By the time we reached our rooms, one would think we were tired of blurting “beautiful” every-now-and-then, but to everyone’s surprise, we weren’t, all courtesy to the fabulous suite we were put up in. Cut to ‘Mayur Mahal’, which is a bespoke suite from the array of 10 and boasts of a princely-inspired décor with fine works of wooden lattice and Araish work ceilings and discrete niches. The suite was done up in regal hues, impeccable furnishings, and plush upholstery.
Dinner was by the pond and under the canopy of stars and candlelight. What made it even more special was the staff ensuring that everything was perfect, right from the arrangement of the table to the temperature of the food. Another praiseworthy feat was the delectable dinner that was put together for us by the chefs who ensured that we had their best vegan delicacies! We could wax eloquent about how delicious the food was for the rest of the travelogue but we’ll call it a night here. 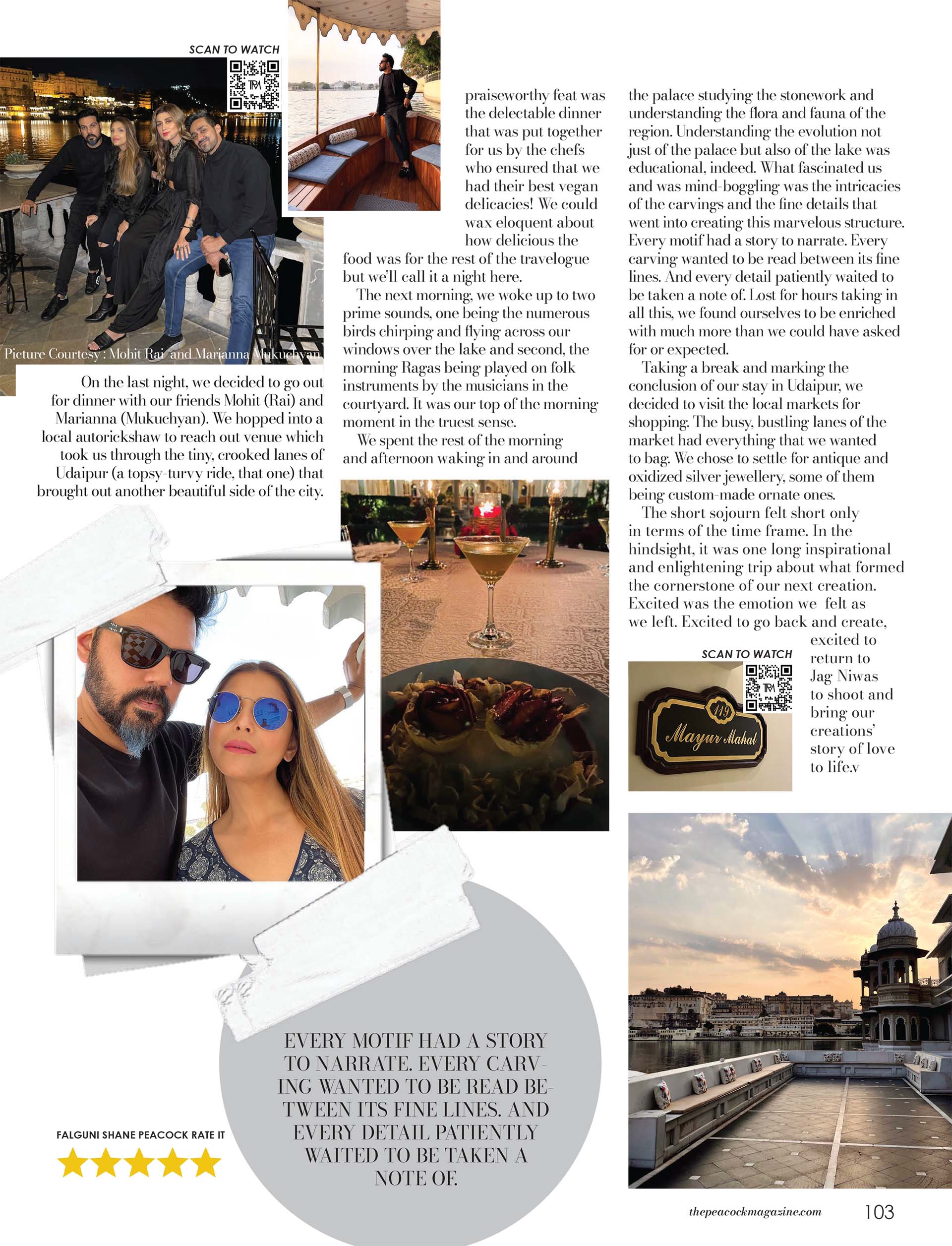 The next morning, we woke up to two prime sounds, one being the numerous birds chirping and flying across our windows over the lake and second, the morning Ragas being played on folk instruments by the musicians in the courtyard. It was our top of the morning moment in the truest sense.
We spent the rest of the morning and afternoon waking in and around the palace studying the stonework and understanding the flora and fauna of the region. Understanding the evolution not just of the palace but also of the lake was educational, indeed. What fascinated us and was mind-boggling was the intricacies of the carvings and the fine details that went into creating this marvelous structure. Every motif had a story to narrate. Every carving wanted to be read between its fine lines. And every detail patiently waited to be taken a note of. Lost for hours taking in all this, we found ourselves to be enriched with much more than we could have asked for or expected.
Taking a break and marking the conclusion of our stay in Udaipur, we decided to visit the local markets for shopping. The busy, bustling lanes of the market had everything that we wanted to bag. We chose to settle for antique and oxidized silver jewellery, some of them being custom-made ornate ones.
The short sojourn felt short only in terms of the time frame. In the hindsight, it was one long inspirational and enlightening trip about what formed the cornerstone of our next creation. Excited was the emotion we felt as we left. Excited to go back and create, excited to return to Jag Niwas to shoot and bring our creations’ story of love to life.

WHY IS IT IMPORTANT FOR BRANDS TO CHOOSE THEIR MESSAGE WISELY?

IT’S A MARRIAGE MADE IN HEAVEN AT SONEVA FUSHI