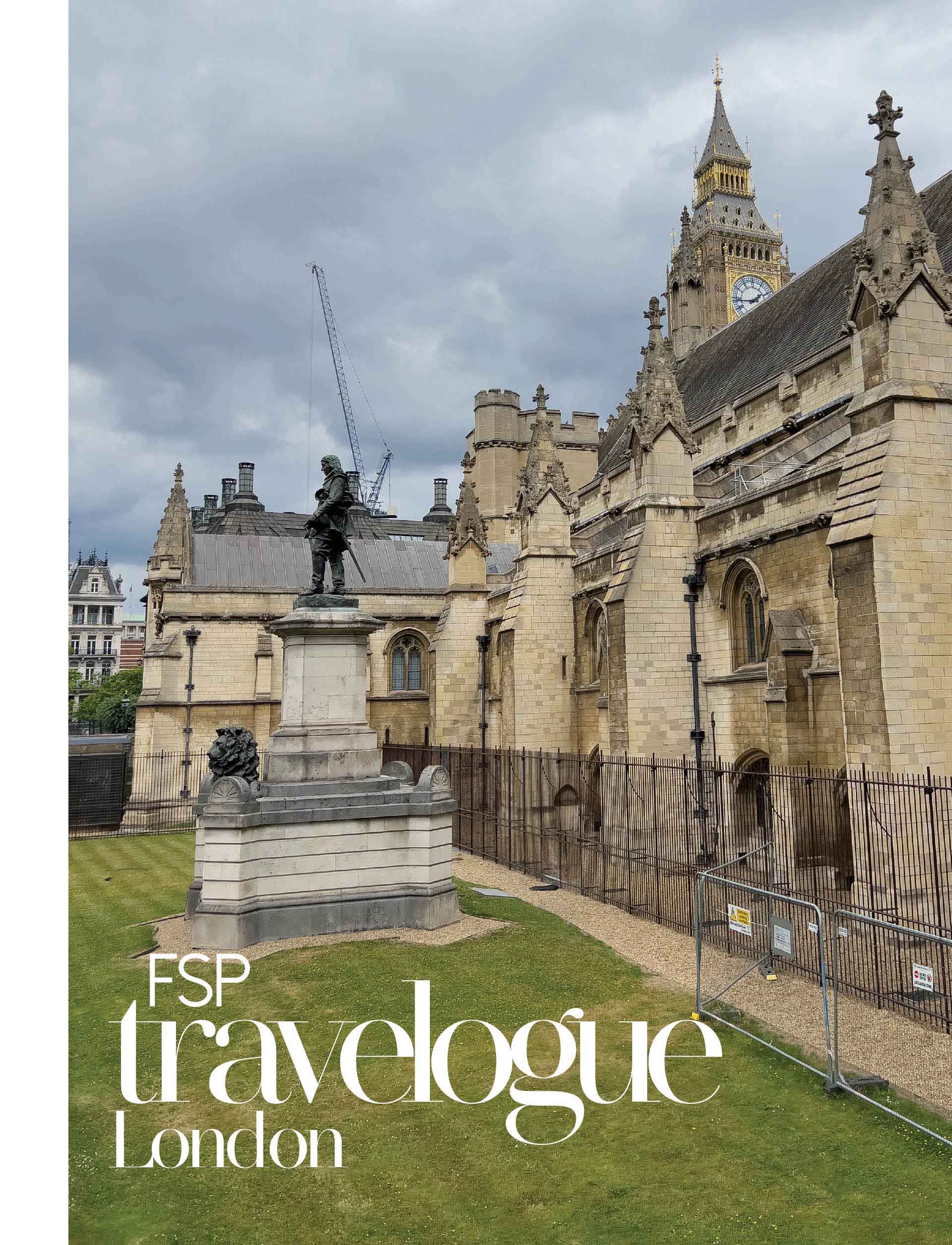 London will always be special to us. More than a decade ago we found ourselves bracing the international runway for the first time as we showcased at the London Fashion Week. Since then, the city has had a special place in our hearts. Over the time, that one showcase lead to many and before we knew, we were ten fashion seasons down showing our couture to fashion’s bigwigs and enthusiasts.

Nostalgia hit us hard as we started planning our trip to the beautiful city, this time for another special reason. A couple of days ago when we got a call from the NRI Shiromani Institute, we were told that we would be receiving the prestigious awards and were invited to give a speech at the House of Lords. We were beyond humbled to receive an award that was earlier conferred upon The Dalai Lama, Mother Teresa and many other eminent personas who made India proud. At the same time, we were also excited to be receiving it, not only for the brand’s work but also for the Peacock Foundation and the causes it champions. It’s a great feeling to be recognized by such a reputed institute.

Days before the award ceremony, we landed in London on a balmy afternoon. We knew we wanted to make the most of the warm sunshine that shone on the gorgeous parks on London. Shane and I, unpacked and soon found ourselves walking down the Oxford streets and basking in the beauty of the city. The long walk wounded up with us taking the famous-infamous pedal-powered rickshaws with blinding pink lights and some cool, fun music. Many may count it as one of the things one shouldn’t do when in London, but for us, it was a joy ride which we thoroughly enjoyed. (We made a mental note of not striking anything off our bucket it. Unless we experience it ourselves.) 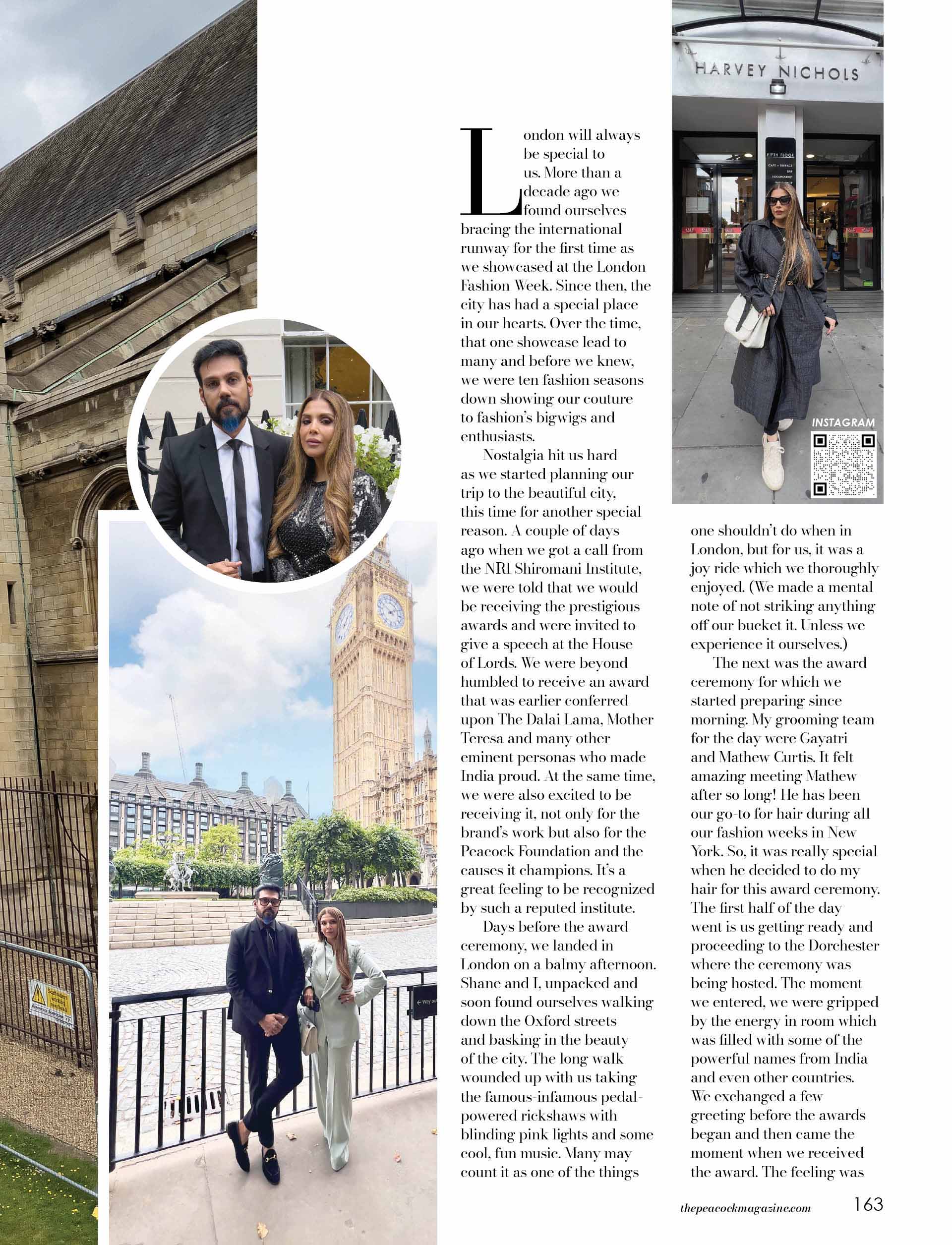 The next was the award ceremony for which we started preparing since morning. My grooming team for the day were Gayatri and Mathew Curtis. It felt amazing meeting Mathew after so long! He has been our go-to for hair during all our fashion weeks in New York. So, it was really special when he decided to do my hair for this award ceremony. The first half of the day went is us getting ready and proceeding to the Dorchester where the ceremony was being hosted. The moment we entered, we were gripped by the energy in room which was filled with some of the powerful names from India and even other countries. We exchanged a few greeting before the awards began and then came the moment when we received the award. The feeling was inexplicable. We along with some of our friends—Michelle Poonawalla, Yohan Poonawalla, Shribala Chordia, Sagar Chordia, Ritu Hinduja and others proceeded to The Dorchester Rooftop for dinner. The night ended with some wine, dine and good laughs.

On the following day, we were supposed to give a speech about the two countries i.e. India and UK, and their association at the House of Lords. We were ready by the afternoon and left for the House of Lords—another first for us. As we walked across the parliament, we were awestruck by the magnitude and the beauty of the structure. Even the passage inside was replete with gorgeous tapestries and paintings that were almost 400 years old. We were blown away by its beauty. We reached the hall and the ceremony commenced. “Shane took over the stage as I’m extremely shy of public speaking. But seeing him stand there and talk about Falguni Shane Peacock and the art. Culture and fashion exchange between the two countries made me immensely proud of him and us,” says Falguni Peacock. We also heard other awardees talk about the amazing work that they are doing as it felt good to see how selflessly they’ve been contributing to the society. The event was followed by a high tea where we experienced what the brouhaha after the famous afternoon tea time was. Not only were the tables laid out with some delectable savories, breads and desserts, it was also laden with teas of several kinds. Later that evening, we went to dine at one of London’s best restaurants, Novikov, with our friends Sagar and Shribala Chordia. “As we entered, I thought I saw Tom Cruise but when I told everyone, nobody as ready to believe me. Soon after when Falguni downed a glass of wine, she stood up to check it out for herself. She and Shribala went to the other part of the restaurant and they did spot him. Falguni couldn’t contain her excitement and gasped out loud taking Tom Cruise’s name. The entire restaurant turned to see Tom, who by the way, was dining with Benedict Cumberbatch. Within minutes the entire restaurant flocked to get a better glimpse of their favourite stars and before we could all take a picture, their bodyguards were on duty,” says Shane. This funny incident will always be etched in our minds and we will always find ourselves going back in time and laughing about it. 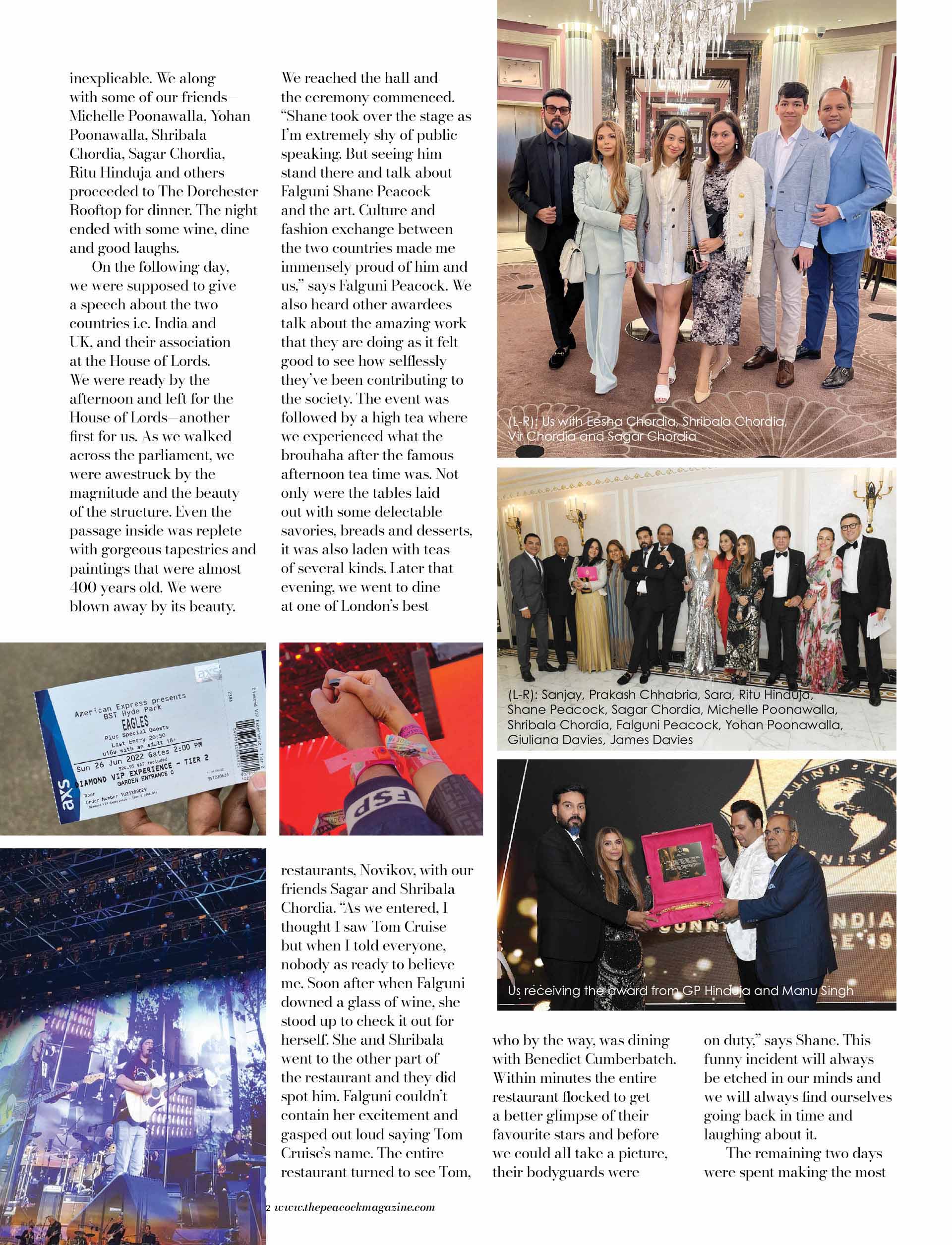 The remaining two days were spent making the most of our time in the city. We started early and took a long stroll on the Oxford street and explored some stores along the way. We stopped by the Rizzoli store and browsed through some really good covers. We also dropped by Harrods for a quick visit before settling down at the EL&N café that’s in the vicinity to enjoy some delicious Mediterranean cuisine. The evening was spent at the exclusive members-only Marks Café, which was replete with some of the greatest painting we’ve ever seen. From Picasso to Chagall, Lithographs to line drawings—it was a treat to our eyes! Needless to say, we had a great time with our friends who joined us. The next morning, we went to Selfridge’s to shop some stuff before we headed back. The highlight of the trip, however, was us trying to get this one particular watch our daughter wanted. We would visit the store every day to try our luck but the huge line at the store to get the same limited-edition watch bogged us down. Nonetheless, we would go to the store daily with some hope every day. That afternoon we took another stroll after a quick lunch and a coffee run with our friends Pooja and Arup Chauhan. We went to the Hyde Park and after walking for a bit, we heard some music far off. We trailed the sound to land up at the Eagles’ concert that was happening there. We jumped at the opportunity, got ourselves two tickets and made it to the show. Oh, what an exhilarating experience it was! We’d have never thought that a causal stroll could land us into our favourite artist’s show. We swayed to the music all evening, had some champagne and then called it a day. 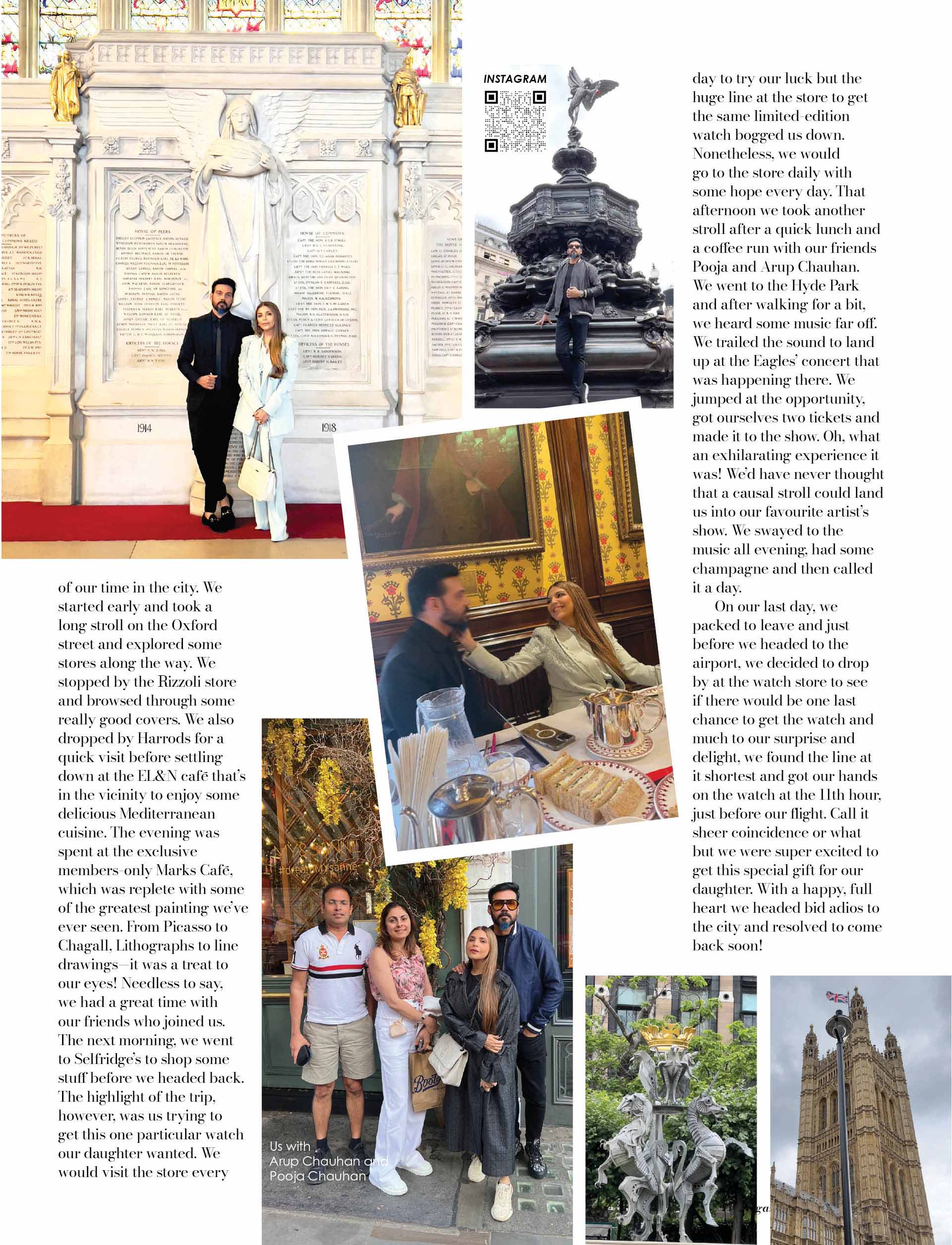 On our last day, we packed to leave and just before we headed to the airport, we decided to drop by the watch store to see if there would be one last chance to get the watch and much to our surprise and delight, we found the line at it shortest and got our hands on the watch at the 11th hour, just before our flight. Call it sheer coincidence or what but we were super excited to get this special gift for our daughter. With a happy, full heart we headed bid adios to the city and resolved to come back soon!