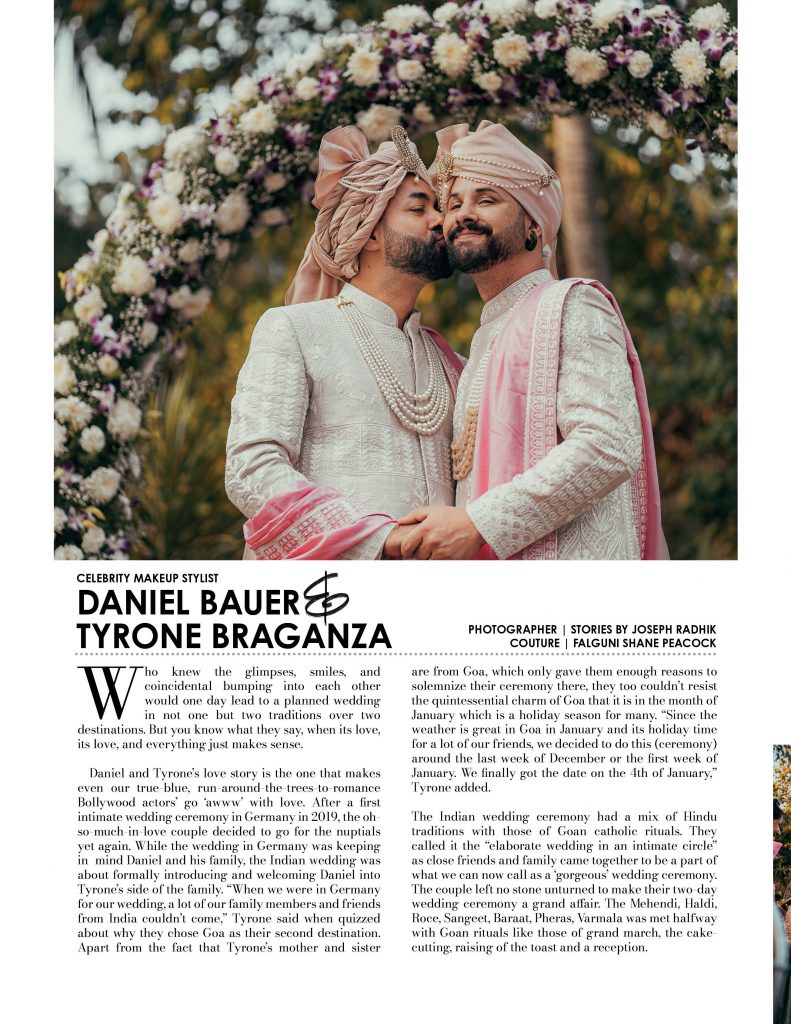 Who knew the glimpses, smiles, and coincidental bumping into each other would one day lead to a planned wedding in not one but two traditions over two destinations. But you know what they say, when its love, its love, and everything just makes sense.

Daniel and Tyrone’s love story is the one that makes even our true-blue, run-around-the-trees-to-romance Bollywood actors’ go ‘awww’ with love. After a first intimate wedding ceremony in Germany in 2019, the oh-so-much-in-love couple decided to go for the nuptials yet again. While the wedding in Germany was keeping mind Daniel and his family, the Indian wedding was about formally introducing and welcoming Daniel into Tyrone’s side of the family. “When we were in Germany for our wedding, a lot of our family members and friends from India couldn’t come,” Tyrone said when quizzed about why they chose Goa as their second destination. Apart from the fact that Tyrone’s mother and sister are from Goa, which only gave them enough reasons to solemnize their ceremony there, they too couldn’t resist the quintessential charm of Goa that it is in the month of January which is a holiday season for many. “Since the weather is great in Goa in January and its holiday time for a lot of our friends, we decided to do this (ceremony) around the last week of December or the first week of January. We finally got the date on the 4th of January,” Tyrone added. 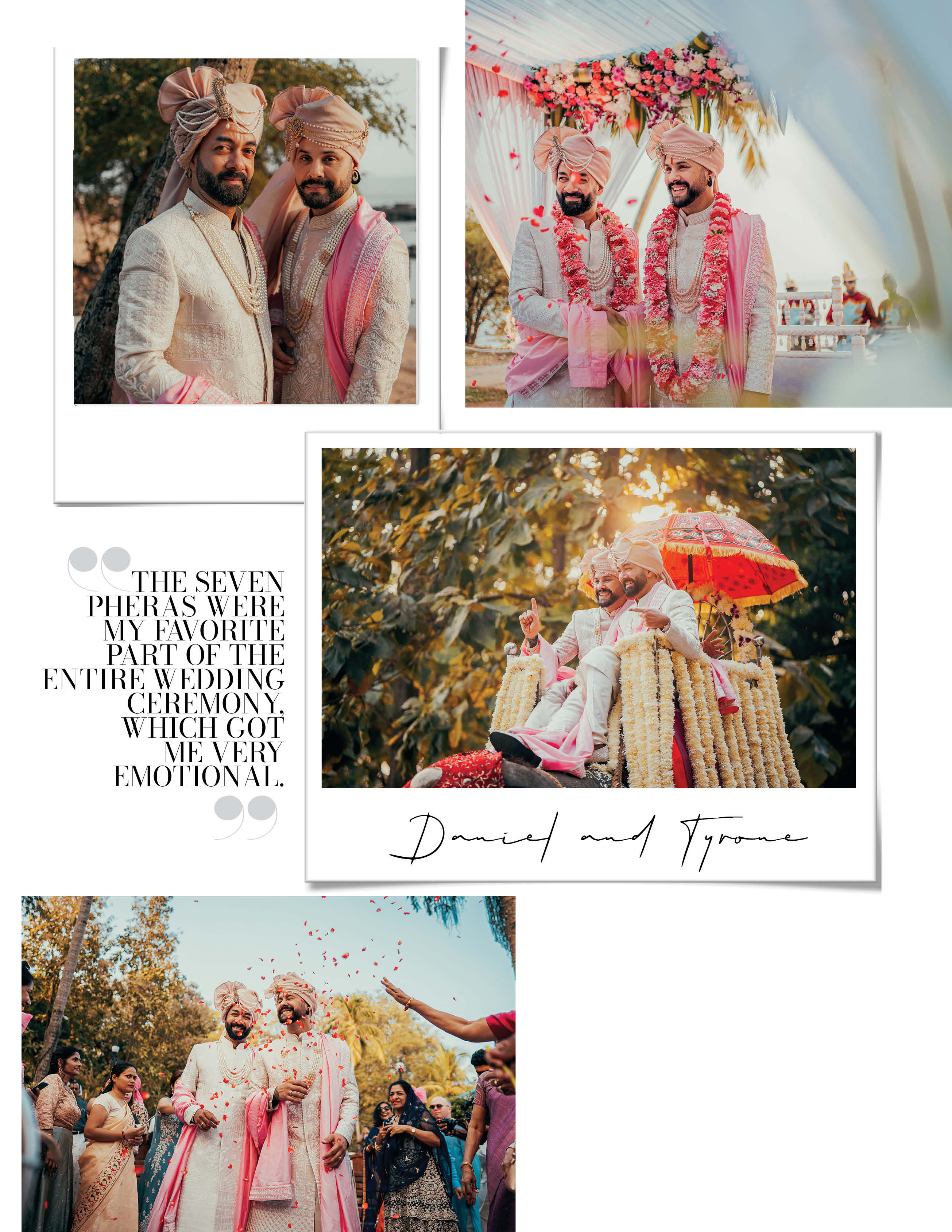 The Indian wedding ceremony had a mix of Hindu traditions with those of Goan catholic rituals. They called it the “elaborate wedding in an intimate circle” as close friends and family came together to be a part of what we can now call as a ‘gorgeous’ wedding ceremony. The couple left no stone unturned to make their two-day wedding ceremony a grand affair. The Mehendi, Haldi, Roce, Sangeet, Baraat, Pheras, Varmala was met halfway with Goan rituals like those of grand march, the cake-cutting, raising of the toast and a reception. Needless to say, the preparations and the planning that went into making the dream-like wedding come true was galore. But it was all worth it when Tyrone saw Daniel and his kith and kin’s expressions at each of the wedding ritual, especially at the Sangeet. “Daniel was most excited about the Indian wedding. The most exciting part was the Sangeet with the dance performances,” laughs Tyrone as he recalls the gala night. Talking about the reaction of Daniel’s folks, he said, “His family and friends didn’t know what to expect. They were truly fascinated by the Mehendi and Haldi ceremonies on the day before the wedding day. They were very excited with the Baraat, the Pheras and the Varmala exchange. They were excited about every function.” It was the glint in Tyrone’s eyes that spoke more about his happiness than his words will ever say. 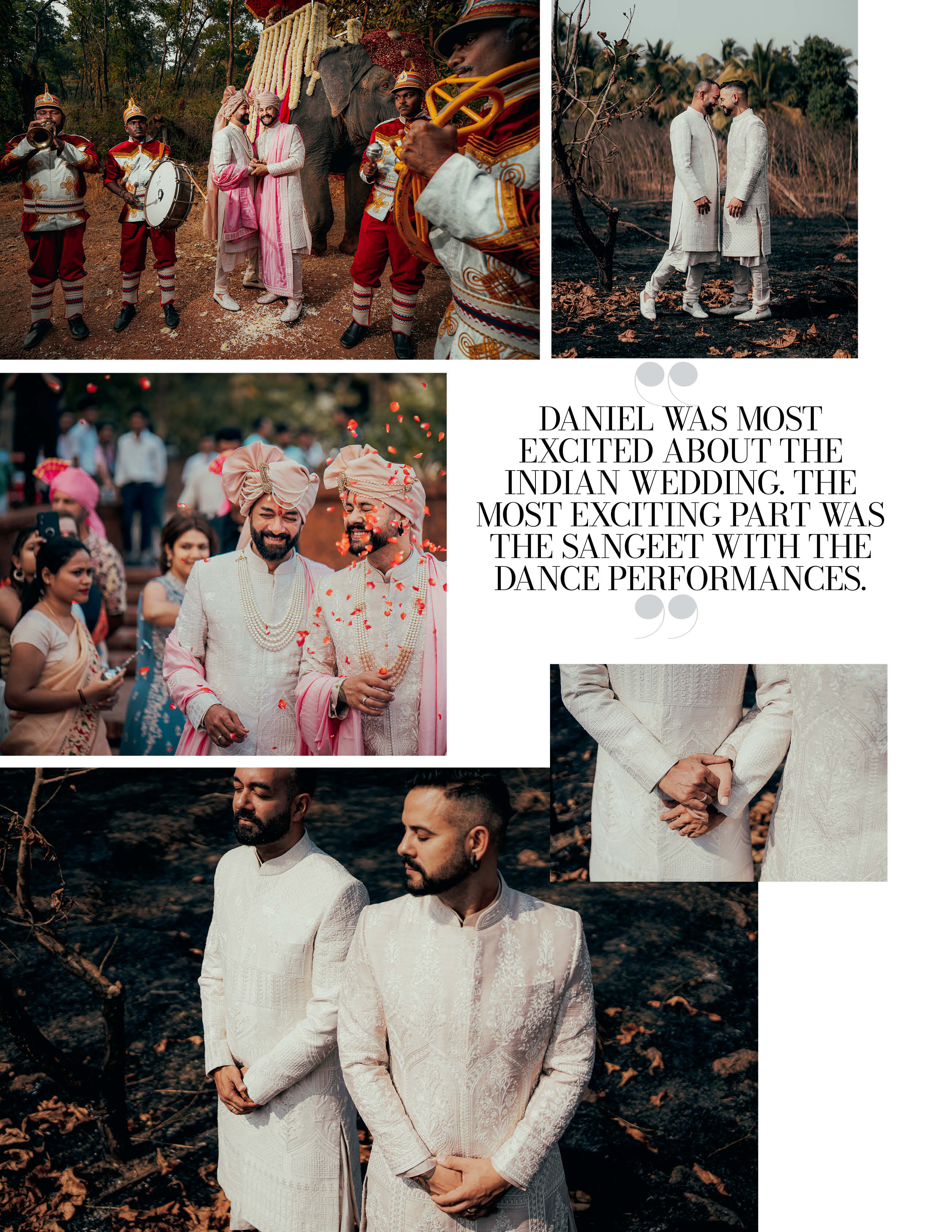 The wedding day winter sunlight unified with the fragrance of fresh flowers, which formed the central element of the wedding décor and the theme. But none of these or the jovial friends and family could ease the pre-wedding jitters of the couple. Nervous, giddy-with-love, and excited beyond comprehension just like the first time, the couple exchanged their Varmalas as coyly as they exchanged their vows with each other for the first time in Germany. This time around, the couple’s parents were invested in all the rituals as much as the couple itself. Daniel’s parents sat along with Tyrone’s mum at the Mandap as the couple took their Pheras. Both, the couple and their family, found a tear in the corner of their eye as the wedding took place. “We were at the Mandap this time and it was the best feeling ever. The seven Pheras were my favorite part of the entire wedding ceremony, which got me very emotional,” Tyrone smiles. Ask him if this is the wedding he dreamed about and pat comes an affirmative reply. “In fact, I always wanted to have a wedding march. I just feel this brings everyone together, and it truly worked like a charm in our wedding,” Tyrone added. Sentimental is not the only emotion this wedding stirred. A good dose of laughs and goof ups too made it to the couple’s share of memories. From the knife blade separating from its handle while cutting their wedding cake to saving their custom-made silk sherwanis by label Falguni Shane Peacock from catching fire while giving ghee to the Agni, the couple found their happy moments even in the silliest of moments, and ultimately in each other.
And so begins their forever hereafter..