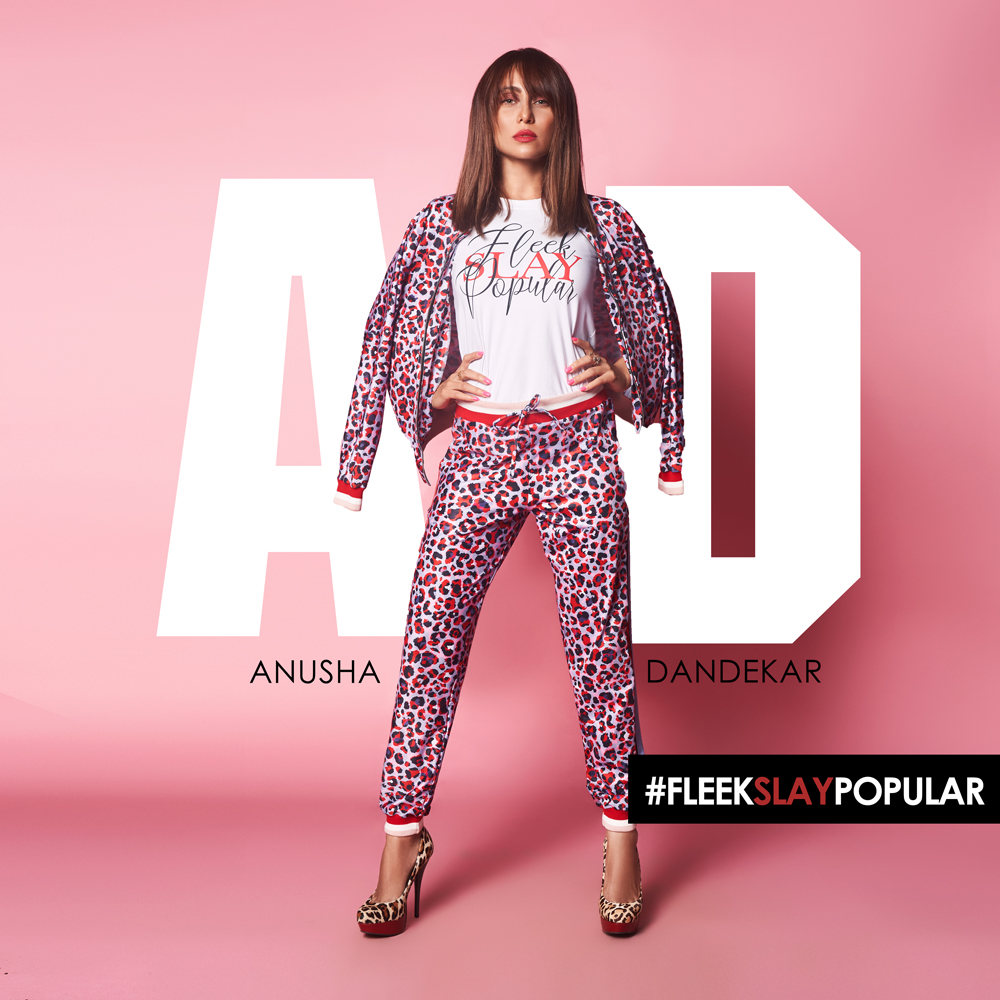 VJ Anusha needs no introduction, she has been a television anchor for more than a decade, and has been a pivotal part of the growing Indian pop-culture scene. Apart from acing in front of the camera, she is also well-known for her strong sartorial choices. Her cool-girl style makes her popular amongst the young millennials and with her recent launch of a lingerie line, she is fixing a thing or two about every Indian woman’s innerwear closet. At the launch of the #iamfsp2.0 t-shirt campaign, we asked her about the effect influencers have on fashion and how game-changing it has been.

1) HOW DID YOU VENTURE INTO BECOMING A VIDEO JOCKEY?
“So I basically became an MTV VJ at the age of 19, but I dreamt of being one since the age of 9. That’s right at 9 years old I knew I wanted to be an MTV VJ, in India and that was the goal. I think it’s because I talk a lot and there was probably no other profession for me, so my parents were like, “Thank God there’s somebody who will pay you to talk now”. I never have anything less to say, so that works, and when I was in the VJ hunt, I was made an example for others, as I didn’t stop talking. I was like, finally somebody who appreciates that.”

2) WHAT DOES IT TAKE TO BECOME A SUCCESSFUL VIDEO JOCKEY?
“Just like I said, talk without pausing, and always act like you know what you’re talking about even if you don’t.”

3) YOU’VE RECENTLY LAUNCHED YOUR OWN LINGERIE LINE, TELL US MORE ABOUT THAT?
“This was another dream, after the MTV VJ dream, the next dream I had was oh my God I need to help the lingerie world here, because I grew up with a very bikini culture and we had no rules or restriction irrespective of your body type or skin colour, we were allowed to embrace ourselves, and I think that is very difficult for women here and I wanted to change that. I focused on the college kids the younger crows but that doesn’t mean everyone can’t wear it. I just want everyone to have fun, affordable, colourful underwear, why does everyone have to take underwear so seriously be like we can’t talk about it. Yes, you can, and it’s amazing. Do you know that 99% of women wear underwear for themselves, so if you’re wearing good underwear you will actually be in a good mood; it actually changes your mood. By the way, I’m sold out in my 5 of my collection pieces, thank you, everybody.”

4) WHAT’S YOUR TAKE ON FASHION INFLUENCERS?
“I feel like I’m a fashion influencer and it’s a lot of pressure, but it’s also an incredible way for people to replicate things they like and get inspired or aspire somebody. I didn’t even know I am a fashion influencer until MTV put me in a show called MTV Style Check, where I had to talk about fashion, I loved it but I didn’t know I could do it as well as I did it. When I actually dress I put no thought into it, I just throw on things, mix and match, it all just kind of works out. I think that’s what fashion is, you just have to love yourself, your body, your skin tone, embrace who you are and then when you put the clothes on the clothes will fall in love with you and it will always look good. As they say, confidence is the key, it actually is.”