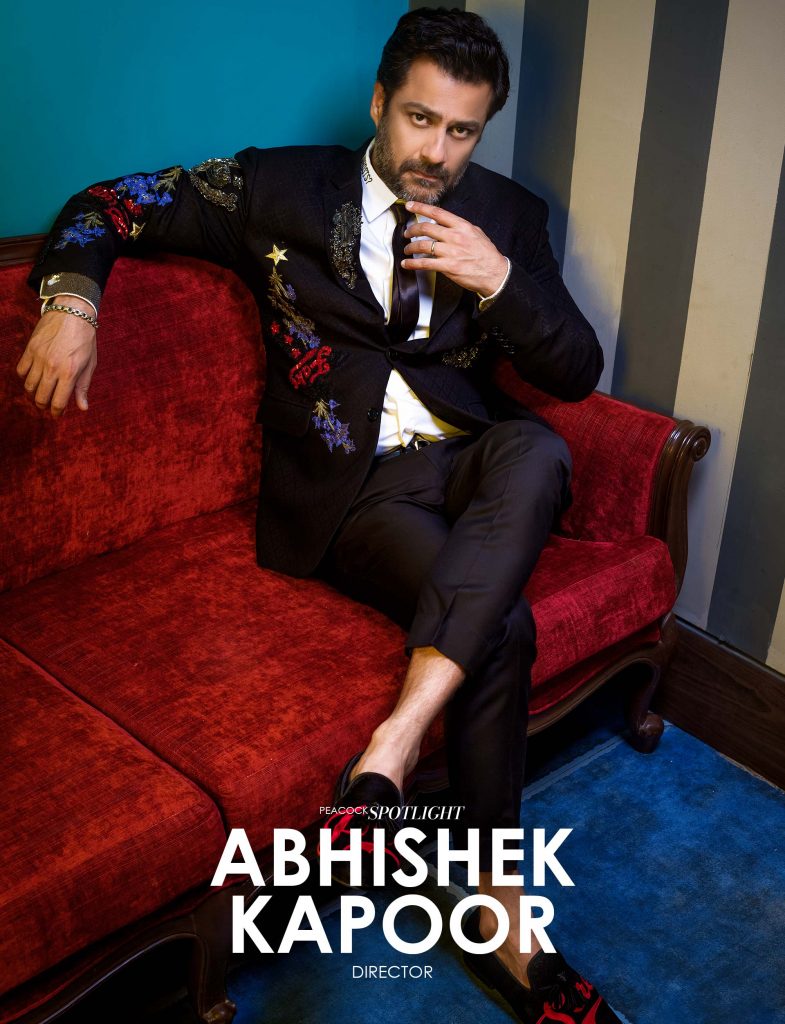 Bollywood’s successful director Abhishek Kapoor and founder of production company ‘Guy in the sky pictures’ created ripples by giving, what is touted as India’s first modern, Indie-classic and cult film ‘Rock On!’. The director, who is a recipient of three National Awards, has churned out movies that ditch off-the-rack ideas and resorts to out-of-the-box ideas. Kapoor’s incredible work is depicted in his directorial outings Kai Po Che, Fitoor, sequel Rock On II and his recently written and directed Kedarnath. His myriad take on slice-of-life actions is what makes each of his movies stand apart. His knack of turning around the regular, realistic representation of life into something novel finds takers in numbers a plenty.

“We caught up with this versatile writer-director in a fun interview to understand his fashion statement, his inspiration behind the movies he makes and everything in between.”

1) IF NOT A DIRECTOR, WHAT WOULD YOU BE?
“I can’t imagine anything else. I think my life has brought me to becoming a director. So it has chosen me, more than I chose to be it.”

2) ANY MOVIE YOU WISH YOU HAD MADE?
“There are a lot of Clint Eastwood’s movies I wish I had made”

3) WOULD YOU EVER CONSIDER MAKING FASHION FILMS?
“If the film was about fashion, then why not! For sure.”

4) TELL US SOMETHING ABOUT YOUR FASHION CHOICES/PERSONAL STYLE.
“I generally dress understated. I have to be comfortable and the fit is most important to me. Trying Falguni Shane Peacock is definitely something that is making me change my mind and wanting me to step out a little.”

5) THE MOST TALENTED SET OF ACTORS IN THE INDUSTRY IN YOUR OPINION?
“Aamir Khan, definitely. Kangana Raut, Sushant Singh Rajput and Rajkummar Rao to name a few.”

6) PHOTOGRAPHERS, DIRECTORS ETC. TEND TO HAVE MUSES. DO YOU HAVE ONE?
“No, because I try not to repeat myself in the films that I do. In fact, every film of mine is quite a departure from earlier experiences. For me, making a movie is more about unlearning everything I know and starting all over again. Hence, for every new movie I look for a new muse.”

7) WHAT COLOUR DEFINES YOU?
“Blue. It is cool and calming like the sea.”

8) TELL US COMMON MISCONCEPTIONS ABOUT YOU.
“That I am arrogant, difficult and I can be fooled.”

9) ANY INTERNATIONAL MOVIE THAT REALLY INSPIRED YOU?
“The fact that Steven Spielberg did Jurassic Park and Schindler’s List back to back just blows my mind. The fact that he could do it, he had the opportunity to do it and the fact that he created that opportunity for himself to do it, is just so inspiring.”

10) IF YOU HAD TO REMAKE ANY MOVIE…
“It would be the Ramayana. Whatever I have seen of it so far is one dimensional. It is like a lesson read out of a book. But for me, what will be really amazing, is to see those characters come alive and maybe be 3 dimensional. To take you into the hearts, souls and minds of those characters and understand why they are Gods.”

11) ANY LOVE STORY WHICH IS CLOSE TO YOUR HEART?
“Mine with my wife.”

12) WHEN NOT WORKING, WHAT WOULD WE FIND YOU DOING IN YOUR LEISURE TIME?
“Life is moving pretty fast and I have a 2 year old son now! I think everyday when I come home, he is a new person. So that is the most exciting part!”