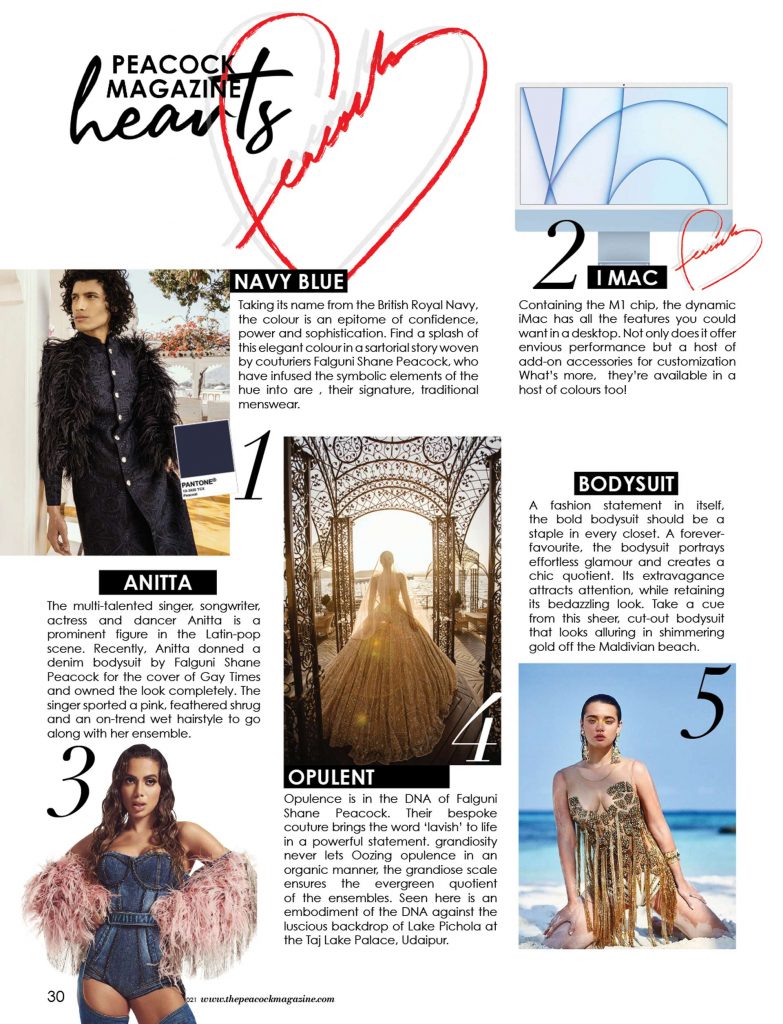 [1] Navy Blue
Taking its name from the British Royal Navy, the colour is an epitome of confidence, power and sophistication. Find a splash of this elegant colour in a sartorial story woven by couturiers Falguni Shane Peacock, who have infused the symbolic elements of the hue into are , their signature, traditional menswear .

[2] iMac
Containing the M1 chip, the dynamic iMac has all the features you could want in a desktop. Not only does it offer envious performance but a host of add-on accessories for customization What’s more, they’re available in a host of colours too!

[3] Anitta
The multi-talented singer, songwriter, actress and dancer Anitta is a prominent figure in the Latin-pop scene. Recently, Anitta donned a denim bodysuit by Falguni Shane Peacock for the cover of Gay Times and owned the look completely. The singer sported a pink, feathered shrug and an on-trend wet hairstyle to go along with her ensemble.

[4] Opulent
Opulence is in the DNA of Falguni Shane Peacock. Their bespoke couture brings the word ‘lavish’ to life in a powerful statement. grandiosity never lets Oozing opulence in an organic manner, the grandiose scale ensures the evergreen quotient of the ensembles. Seen here is an embodiment of the DNA against the luscious backdrop of Lake Pichola at the Taj Lake Palace, Udaipur.

[5] Bodysuit
A fashion statement in itself, the bold bodysuit should be a staple in every closet. A forever-favourite, the bodysuit portrays effortless glamour and creates a chic quotient. Its extravagance attracts attention, while retaining its bedazzling look. Take a cue from this sheer, cut-out bodysuit that looks alluring in shimmering gold off the Maldivian beach. 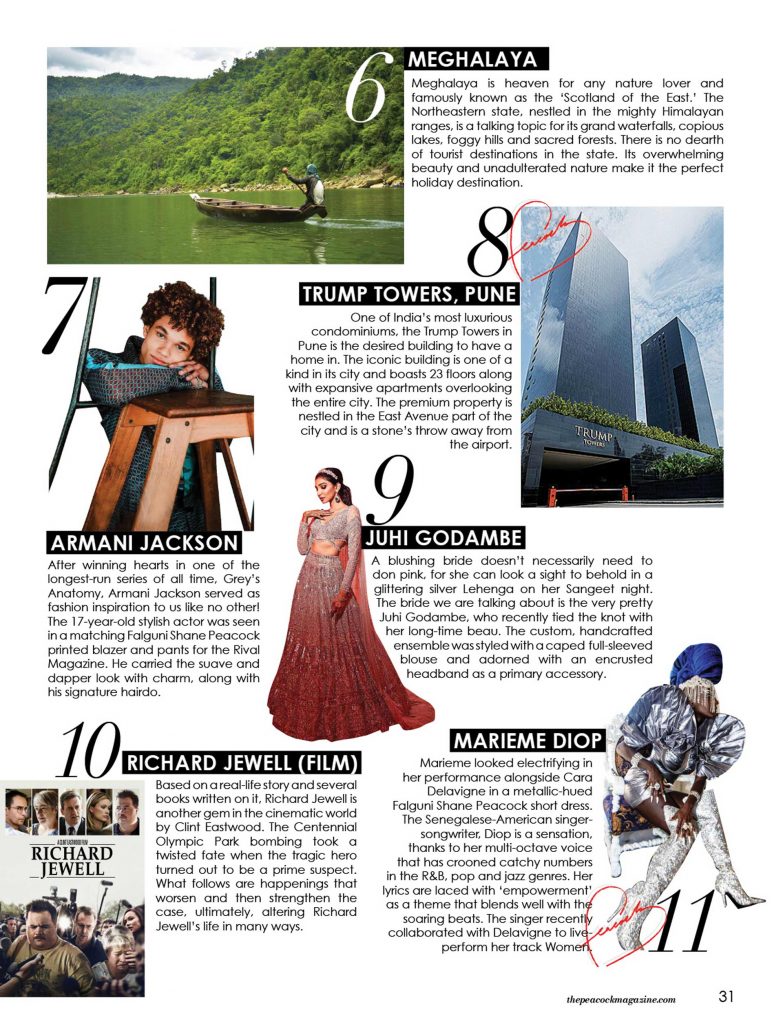 [6] Meghalaya
Meghalaya is heaven for any nature lover and famously known as the ‘Scotland of the East.’ The Northeastern state, nestled in the mighty Himalayan ranges, is a talking topic for its grand waterfalls, copious lakes, foggy hills and sacred forests. There is no dearth of tourist destinations in the state. Its overwhelming beauty and unadulterated nature make it the perfect holiday destination.

[7] Armani Jackson
After winning hearts in one of the longest-run series of all time, Grey’s Anatomy, Armani Jackson served as fashion inspiration to us like no other! The 17-year-old stylish actor was seen in a matching Falguni Shane Peacock printed blazer and pants for the Rival Magazine. He carried the suave and dapper look with charm, along with his signature hairdo.

[8] Trump Towers, Pune
One of India’s most luxurious condominiums, the Trump Towers in Pune is the desired building to have a home in. The iconic building is one of a kind in its city and boasts 23 floors along with expansive apartments overlooking the entire city. The premium property is nestled in the East Avenue part of the city and is a stone’s throw away from the airport.

[9] Juhi Godambe
A blushing bride doesn’t necessarily need to don pink, for she can look a sight to behold in a glittering silver Lehenga on her Sangeet night. The bride we are talking about is the very pretty Juhi Godambe, who recently tied the knot with her long-time beau. The custom, handcrafted ensemble was styled with a caped full-sleeved blouse and adorned with an encrusted headband as a primary accessory.

[10] Richard Jewell (Film)
Based on a real-life story and several books written on it, Richard Jewell is another gem in the cinematic world by Clint Eastwood. The Centennial Olympic Park bombing took a twisted fate when the tragic hero turned out to be a prime suspect. What follows are happenings that worsen and then strengthen the case, ultimately, altering Richard Jewell’s life in many ways.

[11] Marieme Diop
Marieme looked electrifying in her performance alongside Cara Delavigne in a metallic-hued Falguni Shane Peacock short dress. The Senegalese-American singer-songwriter, Diop is a sensation, thanks to her multi-octave voice that has crooned catchy numbers in the R&B, pop and jazz genres. Her lyrics are laced with ’empowerment’ as a theme that blends well with the soaring beats. The singer recently collaborated with Delavigne to live-perform her track Women.